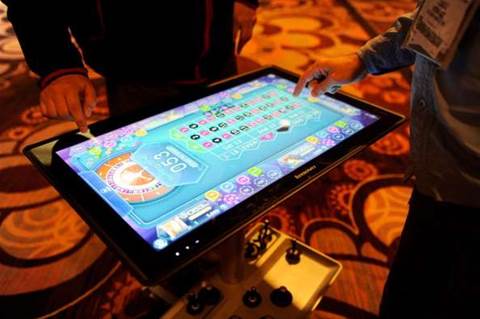 Lenovo is using this year's International Consumer Electronics Show as a stage for unveiling a number of new Windows 8 devices, including touch-enabled ultrabooks and a new over-sized tablet it's dubbed a "Table PC."

Leading Lenovo's new Windows 8 charge is the IdeaPad U310 and U410 Touch ultrabooks, both of which boast super-thin notebook form factors and support for 10-finger multitouch.

The new ultrabooks, which are essentially souped-up and touch-enabled versions of Lenovo's existing U310 and U410 IdeaPads, are only 0.7-inches thick, run on Intel's "Ivy Bridge" Core i7 processors and include the latest Nvidia GeForce GPUs.

The new ultrabooks also include Lenovo's Instant Resume technology, which the PC maker says can rustle the systems out of sleep in just one second.

According to Nick Reynolds, executive director of worldwide consumer marketing at Lenovo, integrating touch into ultrabooks and other PCs is a new priority at Lenovo, as the company expects more and more users to flock to touch-enabled systems with the adoption of Windows 8.

"We think this year, people are going to move to touch really aggressively," Reynolds told CRN. "The majority of our lives will actually be touch-enabled by the end of year."

Reynolds said Lenovo is also bringing touch to its more "mainstream" or traditional notebook lines, including the IdeaPad Z400 and Z500.

The revamped IdeaPad Z400 and Z500 Touch, which were also unveiled Sunday at CES, include the same 10-point multitouch support as the new IdeaPad U310 and U410 Touch, along with Intel's third-generation i7 Core processors.

The new IdeaPad Z400 and Z500 Touch are heavier and thicker than the U310 and U410 ultrabooks but will also boast a more modest price point; Lenovo said the IdeaPad Z400 and Z500 will start at $US699 when they become available starting this March, while the IdeaPad U310 and U410 Touch, also available starting in March, will run for $US799 and $US850, respectively.

In addition to revamping some of its existing Ultrabook and notebook models, Lenovo announced an entirely new form factor, dubbed a "Table PC." Formally called the IdeaCentre Horizon Table PC, Lenovo's new gadget runs Windows 8 and supports multitouch, allowing multiple users to interact with the device at a single time.

The Tablet PC has a 27-inch screen and is targeted largely at consumers. Lenovo noted that the device can be laid flat on any surface and, when paired with included accessories such as "e-dice" and joysticks, is ideal for multiplayer gaming. The "gigantic" tablet can also be propped up by a built-in smart hinge allowing it to be used as an all-in-one PC.

Lenovo said the new IdeaCentre Horizon Table PC will be sold through both its channel and website, starting this winter at US$1,699. Australian pricing and availability for the new products has yet to be announced.

Eliminating departmental friction within MSPs
By Kristin Bent
Jan 8 2013
8:44AM