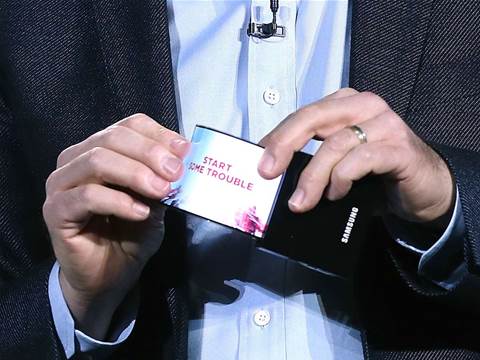 Samsung Wednesday added to the flood of new products it's already unveiled at this year's International Consumer Electronics Show (CES), taking the wraps of its latest Exynos processor, along with a new display technology that allows users to bend and fold their smartphones.

The address also included an appearance by former US president Bill Clinton, who discussed some of the ways technology is advancing the Clinton Global Initiative.

Samsung's Woo kicked off his address by introducing the new Exynos 5 Octa processor for high-end smartphones and tablets. The new processor is the world's first mobile chip to be based on ARM's big.LITTLE architecture, a distinction Woo said allows it to significantly increase the processing power of mobile devices, without compromising efficiency.

"It's an architecture that gives you all the power you want to run intensive apps, but is smart enough to conserve energy when running more basic tasks," Woo said. "Ultimately, we are saving energy and prolonging battery life."

ARM's big.LITTLE architecture works by letting the Exynos 5 Octa designate certain processing tasks to its eight different cores, based on the levels of performance those tasks demand. Compute-intensive tasks like video streaming will be handled by the four higher-end, or "big," ARM Cortex-A15 cores, while lighter workloads will be handled by four lower-end, or "small," ARM Cortex-A7 cores.

Woo also showcased a flexible, next-generation display technology that will allow users to bend and fold their mobile devices.

The announcement, which gave way to a chorus of gasps from attendees, was short on availability details but was accompanied by device prototypes that included the new technology, dubbed "YUOM." One of the reference designs also included a curved display that let text and images wrap around it sides.

These new displays, which are constructed from thin and flexible plastic instead of glass, are said by Samsung to be virtually "unbreakable."

"We are on the brink of extraordinary," Woo told the crowd. "Things that were previously impossible are happening today."

Samsung's keynote concluded with a scheduled appearance by the 42nd US President Bill Clinton, who highlighted some of the ways mobile technology has helped enable the Clinton Global Initiative (CGI), a program Clinton founded in 2005 intended to build new solutions to solve some of the world's "most pressing" socioeconomic challenges. According to CGI's website, the program today has already reached out to over 400 million people in more than 180 countries.

Clinton, who said he was "utterly fascinated" by Samsung's new products and joked that cell phones weighed "about five pounds" when he was in office in 1995, spoke to some of the recent ways mobile devices have helped aid CGI's efforts.

In early 2010, for example, CGI used cell phones to help bring financial services to the nearly 90 percent of Haitians that were without bank accounts. Much of Haiti's income at the time, Clinton explained, came from remittances from Haitians working abroad. The banks would convert workers' foreign currencies to Haitian currency, which helped their businesses flourish but did little to help the citizens of Haiti who were living on less than $US2 a day, Clinton said.

Only 10 percent of Haitians in 2010 had a bank account, meaning they had no way to make direct transfers or deposits. But, nearly 80 percent of Haitians had cell phones, an opportunity CGI jumped on. The organisation rolled out a mobile banking solution that gave Haiti's citizens access to all these services, despite not having a traditional bank account.

"The world has huge challenges, which I think technology can help to overcome," Clinton said, noting other global issues like climate change, which technology may someday be able to solve.

"This electronics show shows how much technology has changed and how much we have to look forward to," he said.

Cloud application revenue made easy
By Kristin Bent
Jan 10 2013
8:37AM