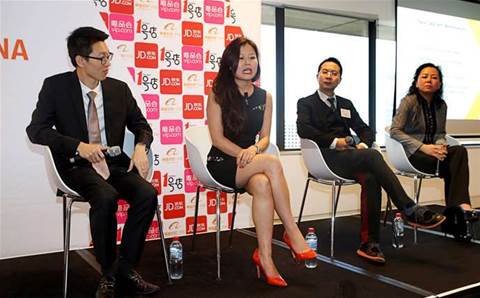 Sydney has played host to a trade delegation from Chinese e-commerce giants Alibaba, JD Worldwide, VIP.com and Yihaodian, which are opening up their vast web channels to Australian businesses.

The four firms are among the biggest e-commerce operations in the world, fulfilling hundreds of millions of orders a year and selling millions of product SKUs.

JD.com, for example, now claims to be the third largest internet company in the world by revenue, boasting 72,000 full-time staff and a market capitalisation of more than US$40 billion. The company’s logistics network covers more than 140 warehouses and 39 cities in China.

An Austrade representative said it was significant to see the four rivals sharing the same stage. “[They are] senior representatives of what constitute 80 percent of total e-commerce in China. It’s quite unbelievable."

The visit follows the signing of the free trade agreement on 17 June between China and Australia, as well as moves by China that will supposedly make cross-border e-commerce more attractive.

While Australian resellers are often fearful of the impact of low-cost products being drop-shipped from China, this week's forum was focused on the reverse: opportunities for  Australian businesses to sell their products into the massive Chinese market. There are estimated to be more than 300 million Chinese e-commerce users.

Three of the major Chinese ecommerce sites are Alibaba’s Tmall.com, rival JD.com and VIP.com - sites likened by some to Amazon.

Alibaba also has Tmall Global, set up to provided an avenue for foreign companies to test the waters in China. Meanwhile, JD.com announced an area of its site last week devoted to selling products from Australia.

Alibaba’s empire also includes Taobao.com, a consumer to consumer marketplace likened by a representative to eBay. On the business to business side, Alibaba also operates Alibaba.com and 1688.com.

Alibaba and others are visiting Melbourne, Sydney and the Gold Coast this week to talk up the opportunity for Australian businesses to sell into China. Austrade is offering a free guide to e-commerce in China.

Rather than Australian companies setting up an entity in China, these e-commerce players act as intermediaries, supplying not only their payment platforms, but also delivery and in some cases marketing support. In some scenarios, Australians might even pay less tax in China exporting products to the country this way.

This week's Austrade forum largely focused on how to sell into China, but the traffic goes both ways.

Alibaba also runs AliExpress, which offers worldwide delivery of a range of products, including technology such as tablets, phones, peripherals and consumer electronics. And Alibaba has a partnership with Australia Post to support not only companies selling to China via Tmall Global, but also products sold into Australia, a spokesperson said.

CRN spoke to Alibaba representatives, who said they expected changes to e-commerce rules in China to make it more attractive for Chinese exporters wanting to sell to Australia. They said sales to Australia were increasing.

Bigcommerce, which sells an e-commerce portal, has also previously promoted a partnership with Alibaba.com giving Australian online merchants integrated access via an app to products sold on the Alibaba.com marketplace.