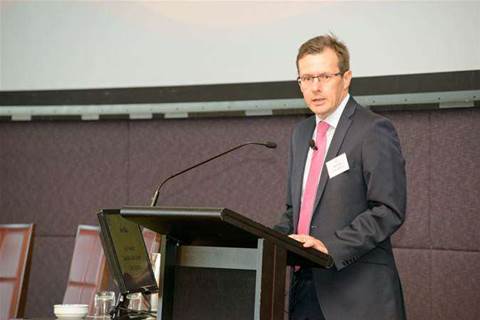 Cisco's Ken Boal in Melbourne in 2015

Cisco Australia has continued to stress that the networking resellers in its channel must evolve to a software-defined world, as the vendor this week holds its second global partner conference of 2016.

In San Diego in March, Ken Boal, vice president of Cisco Australia and New Zealand, warned that traditional networking partners "have no choice” but to adapt to a software-based world.

This week at Cisco Partner Summit in San Francisco, Boal told CRN that efforts to get the partner community on-board are being “fast tracked” and that “one of the biggest areas we’re focused on is the modernisation of networking”.

Giving the scale of the task at hand, Boal stated that in Australia there are "literally hundreds of thousands of network engineers that need to go through this upskilling exercise, including our own folks”, and that in the last couple months, the company’s software-defined networking controller has been downloaded more than 500 times.

While conceding that drastic change can be unsettling and that "everyone’s at their own stage in the evolution of the life cycle”, Boal warned that there’s a “clear and present danger” for partners who don’t adapt quickly enough.

Although customers are better informed than ever before, and some may be capable of doing most of the work themselves, many are still looking for a "guiding hand to lead them on this journey”.

Keen to point out of the benefits of the new software-driven model, Boal gave the example of a recent rollout to around 1600 schools. In the old world, this deployment would have taken months to complete, but under the latest paradigm the work took only “a small number of days” after the physical racking and stacking portion was completed.

Boal also noted that partners that operate or provide networking services on a customer’s behalf also benefit from the SDN model because it makes their offering more competitive and responsive to clients’ needs.

This author is attending Cisco Partner Summit as a guest of Cisco.