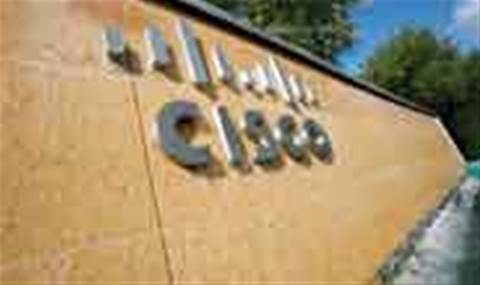 Cisco reported record quarterly revenue for the eighth consecutive quarter, a milestone CEO John Chambers pointed to as proof the networking giant is well on its way to becoming the world's No. 1 IT company.

For its second fiscal quarter, which ended Jan. 26, Cisco beat Wall Street's estimates, reporting $US3.1 billion ($A2.9 billion) in profit, up 44 percent compared to the year-earlier quarter. The company also reported $US12.1 billion in revenue, up 5 percent year over year.

Much of this growth can be attributed to Cisco's data centre business, which was up a whopping 65 percent year over year, along with its wireless segment, which shot up 37 percent, and its video segment, which grew 20 percent.

The company's switches segment was up a modest 3 percent year over year, and security was up by 1 percent. Routers, however, slid 6 percent compared to the same period last year, while Cisco's collaboration unit -- which encompasses both its unified communications (UC) and telepresence solutions -- continued to flounder, falling 11 percent.

Total revenue from Cisco's product segment was up 3.5 percent, while revenue from its services segment increased 10 percent.

Chambers, who set his sights last October on transforming Cisco from the world's top communications vendor to the world's No. 1 IT player, told investors and analysts that the transitions sweeping today's tech landscape are boding well for his company.

"Looking forward, most of the market trends are playing toward our strengths and where we have made our most significant strategic investments," he said on a conference call announcing Cisco's second-quarter results.

Chambers specifically pointed to three trends as catalysts for Cisco's growth. Mobility was the first, he said, as the rise in adoption of mobile devices will fuel demand for more robust networking and data center solutions.

Secondly, he pointed to the future of programmable and application-centric networks, a market segment Cisco has been steadily investing in, as marked by its October acquisition of virtual overlay networking company vCider.

Chamber also pointed to the "Internet of Things" -- a phrase referring to the growing number of objects hosting embedded sensors for wireless communication -- as a trend with which Cisco is well aligned.

According to research report from Piper Jaffray, Cisco partners are feeling similarly optimistic about the future, with many expecting their Cisco businesses to grow, or at least remain steady, in 2013. The firm said out of the VARs surveyed, 25 percent indicated their Cisco businesses were "above plan," 63 percent said they were "in-line with plan," and only 13 percent said business was "tracking below."

Cisco's shares, which are up 25 percent over the last three months, according to the Wall Street Journal, closed up 0.8 percent to $US21.14 just before the market closed Wednesday.