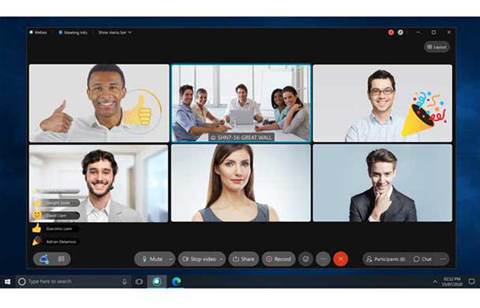 The Cisco Webex Calling portfolio has hit a record 8 billion monthly calls as the company expands the offering into more countries.

Webex has become best known for its video and collaboration features, but Webex Calling, a feature that debuted in November 2019, has also risen in popularity compared to the competition in the crowded cloud-hosted voice arena.

“We do about 8 billion calls a month, so the pace of growth is very, very healthy over here. We have exceeded our own expectations,” Jeetu Patel, Cisco’s senior vice president and general manager, security and applications group, told CRN US.

Webex Calling, part of the Webex portfolio, is a cloud-based phone system that provides standard features such as voice, messaging, voicemail, as well as integration between desk phones, PCs, and mobile devices. Users can tap the Webex platform for their calling plans or choose a plan from Cisco’s carrier partners, and switch active calls from their desktop to a mobile device. Calls can also easily be escalated to video meetings using the Webex platform.

“Calling is particularly strategic because many organisations‘ workflows are still very centred around calling,” Patel said. “But calling is pretty much a networking problem, as much as it’s a software problem, which is why they’re so uniquely positioned to add a lot of value. It requires a lot of networking and software expertise.”

Webex Calling can support a variety of Cisco deskphones, and partners can offer a bundled cloud and hardware voice solution to their customers. Cisco has also integrated many the same features that users are asking for from their video solutions into Webex Calling, including background noise cancellation, Patel said.

The analytics and management that’s been extended to cloud calling customers via the integration has also been key.

The big opportunity in cloud calling for partners, said Cisco’s Patel, is in adoption. “Adoption is a prerequisite. You cannot add value to the customer if you don’t have adoption. One of the things that we encourage our partners to do is anything you can do to make it easier for customers to adopt the technology to get in the hands of the most number of people and to make sure that they can use more and more capabilities, the better off it’s going to be [for Cisco] to make the product more intuitive.”

Grow your software revenue by selling these 5 affordable, essential tools for the modern workplace
By Gina Narcisi
Sep 8 2021
6:53AM