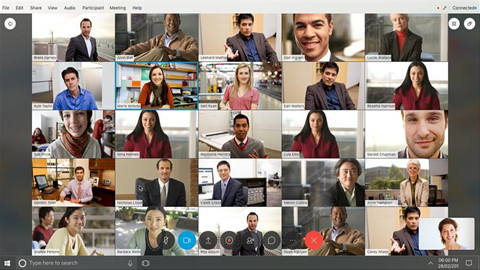 In its biggest collaboration announcement of the year, Cisco Systems revealed a series of many new Cisco Webex innovations aimed at boosting meeting productivity, regardless of the end users’ location.

“Our innovation velocity is probably the fastest it’s ever been by an order of magnitude compared to any time in the past. We are going to continue to invest in making the products simpler, better, and more delightful to make it more inclusive and productive to people, while making it super secure,” said Jeetu Patel, Cisco’s senior vice president and general manager, security and applications Group, told CRN ahead of the WebexOne virtual event.

Cisco introduced more than 35 new capabilities and features for Webex meetings, calling, and messaging, as well as three new Webex devices for employees during WebexOne on Tuesday.

The new features available today for Webex meetings include noise cancellation and speech enhancement, which the company first demoed in October during the Cisco Partner Summit virtual event. Also available today is searchable transcriptions and closed captioning, the ability to highlight action items based on verbal commands, enhanced and customizable video layouts, and the Webex Huddle feature, which allows users to call specific team members into a spontaneous meeting with one click.

In messaging, Cisco will be adding more AI into Webex to help users identify key projects and people in Q1 2021. Today, Cisco is offering the ability to highlight important messages and tasks via the new Webex message pinning feature.

In February, Webex will automatically share recordings to 1:1 and group spaces specified by the user. In calling, Cisco is offering the ability to easily escalate a phone call to a Webex meeting, as well as new ways to buy. Beginning this month, US-based end customers will be able to purchase through new calling plans with PSTN delivered directly from Cisco. The buying option will be available in more countries globally throughout the year, according to Cisco.

The tech giant will be rolling out additional Webex features over the next 90 days, Patel said. These features include in-meeting gestures that will allow meeting attendees to give a “thumbs up” with their hand that AI will translate into a thumbs up on the screen for all participants to see. Immersive sharing will also be added that lets presentation be shared with the speaker’s video overlayed. Webex will offer real-time translation as of February, available in 10 languages. Users will also be able to save and share meeting artifacts, which will automatically be saved within their Webex apps.

Later in 2021, Webex will be expanded to accommodate up to 25,000 fully participating attendees and later this month, users will be able to host up to 100,000 attendees via the Webex Events native live streaming functionality.

Cisco wants to make virtual meetings even better than in-person meeting and events, Patel said. That includes making sure geography isn’t an unfair advantage for some employees and that introverts aren’t being penalized, Patel said. Ideally, Cisco Webex should help billions of people “evenly participate” in the global economy and give all users a voice, he said.

“Cisco’s purpose is to power an inclusive future, and collaboration technology plays a critical role in leveling the playing field so everyone is able to participate in the global economy regardless of geography, language and personality type,” Patel said.

Cisco has been powering businesses across the globe, including healthcare organizations and educational institutions and schools since the start of the COVID-19 pandemic. Patel told CRN that Cisco is seeing the free subscriptions it provided last Spring turn into paid Webex subscriptions.

“The collaboration business is growing very healthily both from a usage perspective as well as from a financial perspective,” he said. “It just so happened that these customers started to see the value … we are now over 600 million monthly users, that’s about 4x growth year-over-year.”

On the hardware side, Cisco is introducing a USB Webex desk camera for the home or the office that uses AI to offer facial recognition and occupancy metrics. The new Webex Desk Hub is a product that lets businesses deploy hotdesking. Users can pair, charge, and connect to meetings and calls by plugging in their own smartphone to the device. Lastly, Webex Desk, a “big sister” to the Webex Desk Pro, lets users using slide or videos as their backdrop while you present—a feature that Cisco refers to as “immersive presenter.”

Cisco this week also announced two new planned acquisitions that will inject more context and insights into Webex and the Webex Contact Center solution. The company said it will buy contact center as a service (CCaaS) firm IMImobile PLC for approximately $730 million and Slido, an audience interaction technology specialist for an undisclosed sum.

Cloud application revenue made easy
By Gina Narcisi
Dec 9 2020
6:30AM