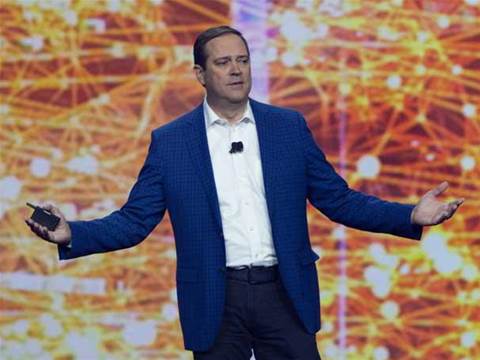 Chuck Robbins has been at the helm of Cisco Systems since 2015. During his tenure as the tech giant’s CEO, Robbins has already seen Cisco through some monumental changes and said he is now leading the company through its most significant business model transition in its history with the help of its loyal base of channel partners.

Under Robbins’ guidance in 2017, Cisco unveiled plans to become a software-first company. It ended its 2021 fiscal year with software-generated revenue that exceeded its goals and timeline, proving that Cisco is now one of the biggest software providers in the world, the company said in September.

Now, Robbins and the executive leadership team have turned their attention to the Everything-as-a-Service, or XaaS, evolution, a business model shift that gives enterprises the freedom to purchase and consume technology as they go.

Robbins broke down the importance and opportunity around Cisco Plus, the company’s strategy for delivering its portfolio as a service, in an interview with CRN. The CEO also talked about the company’s software transformation that led up to Cisco Plus, what partners need to know about XaaS, and what’s challenged him the most as the head of one of the largest tech companies in the world.

How important was Cisco’s shift from hardware to software and subscriptions when you were promoted to CEO?

Believe it or not, in July, I’ll finish my seventh year in this job. We’ve been working on this transformation, and I think we’ve made a lot of progress. It’s obviously very complicated. We’ve seen pure software companies make these transitions, and they’ve done a great job, but I would argue that this is monumentally more complicated with our current portfolio. We have some systems that we still sell perpetual software on, we have pieces of hardware that have an on-premises subscription connected to it, we have pure SaaS, and then we have some solutions that have a piece of hardware connected to a piece of cloud software. We have all these different motions that we’re running, and it’s an incredibly complicated model that we have been executing on. We want to provide our customers complete flexibility on how they consume our technology.

We have found over the years that you gain a lot of trust and credibility with your customers when you give them flexibility. One example would be the move we made in December 2019 when we basically declared that we would sell the platforms that we sell to cloud and service providers. We would sell you systems or we would sell you silicon, we’d sell you hardware boxes or software, or any combination of those that you would like. That web-scale business for us last quarter was up [more than] 200 percent and is up 120 percent on the trailing four quarters. That flexibility just shows that customers will embrace you when you have the right technology that you deliver in a way that makes it easy for them.

Will Cisco Plus trigger another big subscription push?

Yes. I think the great thing is [Cisco Plus] gives our customers flexibility, and it gives Cisco and our partners predictability of future revenue. That predictability allows us to be a little more assertive relative to what we can share with Wall Street. In September 2021, we had our first Investor Day since 2017 and we actually gave long-term guidance. At the beginning of the [2022] fiscal year, we gave annual guidance for the first time ever. One of the key reasons we were able to do that is because of the progress we made on this transition to as-a-service or software. We have enough visibility of revenue coming off our balance sheet in the future, and that gives us the confidence to actually give that [guidance]. Those are some of the benefits for customers, for us, for shareholders; it’s just a good move all the way around.

When do you predict large-scale adoption of XaaS?

I think we’re going to go through the early adopter phase for sure, and we’ll probably learn a lot. I would think probably 2023 is when you start seeing really large-scale adoption of [Cisco Plus.] A lot of what we have to get done right now is sort of the operational infrastructure to support these offers—it’s one of our biggest challenges in getting these delivered to the marketplace. In talking with the team about the demand that we’re seeing building up in the pipeline for [when Cisco Plus is generally available], it may surprise us. I think the Hybrid Cloud [offer] in particular is going to be very well received. And then I think the [SASE] offer, you’re going to see multiple iterations of that offering over the next six months, and I think you’ll see it ramp as we get continue to bring out the next wave of innovation on top of the current offer. What will partners need from Cisco to make XaaS successful?

We’ve moved from being a company that sold everything in a net 30 model. I joke with our teams internally that we would take an order, ship a product, send an invoice and then a thank you. Now, there are all these different models that I described. It just creates huge complexity for our underlying systems and our operational infrastructure. [Cisco COO] Maria Martinez (pictured) has been doing a great job on evolving our infrastructure to prepare for it, and all that work is underway. The thing I’ll tell you is that when we make those changes, we make them together. We don’t want to be at odds with what our partners are trying to accomplish. So, whatever incentives we put in place with our sales force, we need our partner profitability programs to align to that so that we get cohesive energy in the field. I think [partners should be] really continuing to build up that customer success motion, [which] is going to be critical in really helping customers achieve maximum value from the platforms and solutions as they go out.

How important is the 2022 calendar year for Cisco Plus? How big is the opportunity for partners who sell the entire Cisco stack?

That was really at the heart of the EA [Enterprise Agreement] 3.0 announcement we made at Partner Summit in November. I think increasingly, we’ve seen enterprise agreements across pieces of our portfolio that have been very successful, and then we’ve done custom, whole portfolio agreements in some of our very high-end accounts. I think what you’re going to see is [we will] programmatically make that more available through the marketplace. It gives our customers a better overall package of technologies that’s more cost-effective for them. And it gives partners a great opportunity to really drive that customer success motion because it’s just rich software content.

What’s been the most challenging part of being CEO of a major tech company over the past few years?

I think just dealing with the dynamic nature of everything that has come at us as a result of this pandemic, [like] trying to help our employees navigate the complex world where work and life collide every minute. Helping our leaders understand the need to think differently about how they’re leading their people because today you’re not leading people who are sitting in offices and not caring about their personal lives. Now you have to deeply care about their personal lives and what they’re going through. You have to understand if they have children at home, or they have parents that they are taking care of. Then, we’re dealing with regulatory issues and geopolitical issues. We’re opening [the office], we’re not opening, and trying to keep our employees up to speed on how we’re thinking about it. It’s just been a very dynamic situation. What has changed in the last nearly seven years since you became CEO that you didn’t expect?

The external issues that we have to deal with as leaders. There are always external issues, but the breadth of them and the number of them—it would be one thing if you could just come in and run your company and deal with external issues that you either create or that are impacting your company. But if you think about what we’ve gone through with the trade wars, the tariffs going through, social justice issues and then we’ve gone through geopolitical tension on a global basis. We’ve got countries now that are really focused on, ‘It has to be built here. Technology has to be delivered here’—it’s now nationalism that we’ve got to deal with. The pandemic, etc. I think all of these things are—I always joke that they weren’t in the CEO handbook. I think that’s the big difference—the number of external demands. And then candidly, the expectation of CEOs relative to what you have to take a stand on or have an opinion about is much different today than it was when I took this job.

What can partners expect in the next seven years from Cisco?