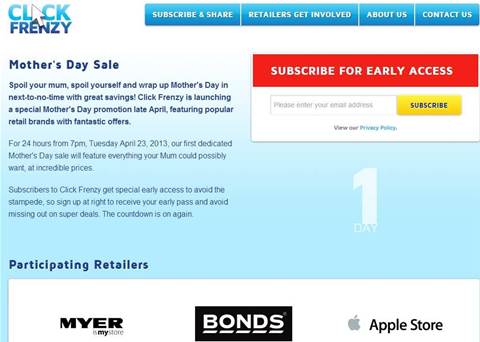 The end of year Click Frenzy sale was Australia’s answer to the Cyber Monday event in the United States, offering discounted products and services from over 200 retailers.

The website experienced a high volume of traffic and was inaccessible within minutes of going live, staying down for the first three hours of the 24 hour sale.

Several technology companies who joined the November 2012 shopping event expressed frustration at the time with what they deemed a lack of value for money. Retail partners pay fees on a tiered level for placement on the Click Frenzy website.

Last year technology vendors Microsoft, Lenovo and Dell signed up to the sale, along with resellers Wireless 1, Nortec IT, Mwave, Dick Smith and Bing Lee.

That number has dropped down to five this year, with Apple, Lenovo, Mwave, Wireless1 and Mobile Citi representing the technology sector.

The organisers of last year's Click Frenzy debut partnered with hosting provider Ultra Serve, which said at the time it had cracked 2 Gbps of non-image content and was experiencing “huge volumes of traffic”, and was therefore having to prioritise users.

Click Frenzy said it decided to switch to Amazon for its Mothers Day 2013 sale in order to “get the best that money could buy”.

“We don’t want to go down like we did again, so we invested in two of the best service providers in the world, in AWS and Akamai. They handle this type of activity on a daily basis. It’s costing us a fortune, but we believe in our need to hold up and prove ourselves.”

Further comment was being sought on the AWS capacity at the time of publication.

Click Frenzy wasn’t the only company unprepared for the November event’s surge in traffic. Retail partners including David Jones were caught unaware, suffering a “technical glitch” which locked shoppers out of particular promotions on its website.

The site was later pulled offline completely, a move which resulted in a public apology from the retailer. It stayed down for three hours.

Arnott said Click Frenzy had advised retailers of the expected traffic volumes for today's sale and encouraged them to prepare accordingly.

“We don’t control what they spend money on, but we’ve certainly recommended they consult with their hosting provider and ramp up accordingly”.

Arnott said he was expecting similar levels to the November traffic. He said the site received 2 million hits in the first few minutes, then once the site was back online following the three hour outage, received 1.6 million unique visitors and 22 million page views.

“It was amazing, for a site that didn’t exist eight weeks prior. We learnt a hard lesson but we are proud of what we’ve achieved,” he said.

Grow your software revenue by selling these 5 affordable, essential tools for the modern workplace
By Allie Coyne
Apr 23 2013
2:57PM