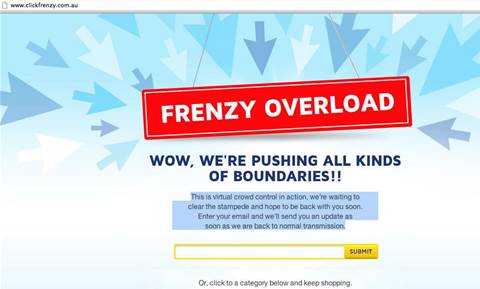 The site became inaccessible minutes into the promotion, which began at 7pm EST last night and will run for 24 hours.

Customers turned to social media to vent, but the operator fought back in a Facebook post claiming it was not at all embarrassed by the unavailability of the site.

It was later forced to acknowledge there were more serious issues when the site remained inaccessible more than an hour-and-a-half after launch.

"Firstly, I would like to issue an apology to anyone who has been inconvenienced and frustrated by the technical issues relating to the inaugural Click Frenzy 24 hour online sale," organiser Grant Arnott posted.

"The technical directors, developers and infrastructure specialists involved in this inaugural event are working to get to the root of what occurred with the wave of traffic at 7pm.

"I am not in a position to describe exactly what has occurred yet as the teams involved are working on the solution first to resolve any problems.

"We will provide answers as soon as they are available. We will continue to issue updates."

By 9.55pm, the site was serving a placeholder message asking users to register to be alerted when it returned to full service.

"This is virtual crowd control in action, we're waiting to clear the stampede and hope to be back with you soon," it read.

"Enter your email and we'll send you an update as soon as we are back to normal transmission."

Click Frenzy's web host, UltraServe, said in Twitter posts it was experiencing "huge volumes of traffic as expected" and that it was "prioritising users", although it did not elaborate.

"We cracked 2 Gbps of non-image content which is quite significant," the host said.

UltraServe said that other customers had not been affected by the flood of traffic caused by hosting Click Frenzy.

Over 200 retailers, including several technology resellers, signed up to the event, which aimed to mirror the success of the Cyber Monday sale in the US.

Grabbing the hybrid cloud opportunity with Lenovo and Azure Services
By Staff Writers
Nov 21 2012
8:24AM