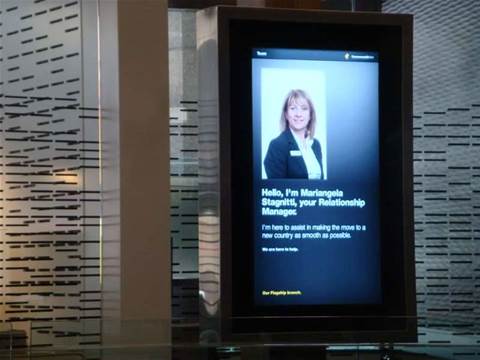 The Commonwealth Bank of Australia (CBA) yesterday launched a Brisbane flagship branch designed to build on and complement its online channels.

Branch visitors were free to use iMac, iPad, iPod and Asus touchscreen devices to browse foreign exchange rates, products, and to make appointments with CBA specialists – much like how Apple customers arranged to visit the vendor’s ‘Genius bar’.

McEwan acknowledged Google’s beta testing model as the inspiration for CBA’s ‘Netbank Labs’, for which customers could opt-in to test and rate new tools.

A total of 40,000 customers had been invited to participate in Netbank Labs. Only 4,000 accepted; those were divided into four groups by products and demographic.

Current Labs features included a savings calculator that allowed users to create a plan and track their progress, and a home loan repayment modelling tool.

In May, the bank also expected to introduce a tool that would allow customers to track their spending by category.

Netbank and Netbank Labs features would also be available in an iPad application to be launched in May.

Further updates would also be released for the bank’s iPhone and iPod applications, all of which were included in a CBA ‘master application’, which so far had been downloaded 839,000 times.

In June, the bank planned to launch an application for foreign exchange calculations – one of the most popular features of its website.

The bank also launched an Android application and a Netbank webpage optimised for Windows Phone 7 earlier this year.

However, the bank had been driven to develop and provide applications to challenge the swathe “bogus apps” that had emerged, he said.

It was inspired in part by the Deutsche Bank’s Q110 prototype branch in Berlin, which combined traditional banking with retail stores, an espresso bar, crèche, and a range of technologies.

The Brisbane flagship was part of a statewide expansion that aimed to launch 24 branches within 36 months, of which 20 were expected by the end of the year.

It came despite Commonwealth Bank CEO Ralph Norris’ comment last week that physical banking transactions had halved in the past seven years.

McEwan estimated CBA’s branch transactions to be declining at a rate of three percent a year. Nonetheless, he expected the flagship branch and others to remain in demand.

With greater support for online and mobile banking, customers were now visiting bank branches for new reasons, such as loan advice and assistance with online systems, he said.

The bank planned to host online banking seminars in the branch, and provide guidance to new users venturing into online banking via one of its self-serve devices.

While not all flagship concepts would be successful, McEwan said those that succeeded would be deployed in other branches nationwide.

“We’re going to make some mistakes with this; I think as an organisation, you need to put some money up and be prepared for abject failure,” he said.

“Our aim is to have a unilateral approach, where you can do whatever you like from wherever you’d like to be.”

Updated on March 29 to clarify that CommBank's Windows Phone 7 offering is an optimised mobile webpage. The bank previously said it had launched a Windows Phone 7 "app".