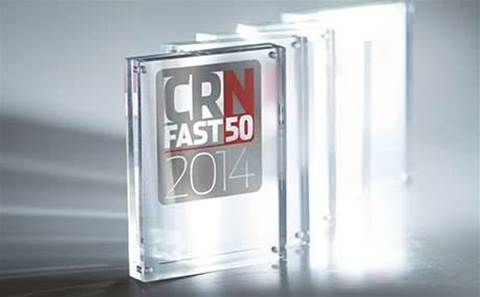 Linked gallery: Meet everyone in the 2014 CRN Fast50

CRN has just announced the 50 fastest-growing companies at our annual CRN Fast50 ceremony in Sydney.

I was delighted to celebrate our first-ever No.1 from Western Australia. With year-on-year growth hitting a startling 232.24 percent in the 2014 financial year to reach revenues of $3.7 million, Vonex was a worthy first-placer.

Rounding out the top three were two Melbourne-headquartered outfits.

The No.3 spot was this year was nabbed by Kloud, a "born in the cloud" house that specialises in migration and is growing its managed services footprint. Kloud grew by 135.09 percent to hit $19.2 million in the 2014 financial year.

You can see all 50 of the companies by clicking here (note, you'll need to sign in).

Looking at this year's data, the clearest theme across the 50 companies that qualified for this year’s CRN Fast50 is that there is no theme.

We journalists love themes – they make our lives easier. It would be a simple narrative if all 50 were “cloud” companies but they’re not. If they all offered managed services, we could slot the list neatly into that ongoing conversation.

There’s no consistency in size; they range from just over a million dollars of revenue up to hundreds of millions of dollars. The same goes with headcount – all the way from a handful of workers up to several hundred.

Perhaps no overarching theme, but there are some trends, and I’ve pored over the data to unpick them. I'll publish my analysis in the coming days, so make sure you are signed up to our Channelwire newsletter.

Few would argue that the tech sector is decidedly Sydney-centric, sometimes to a fault, so I’m chuffed to see another company from outside New South Wales come out on top of the 2014 list. With this year’s No.1 company hailing from Perth, they join previous No.1 companies from Canberra, Adelaide, Melbourne and Sydney. I’m from north of the border myself, so I’m gunning for a Queensland reseller in 2015.

I’m delighted at the mix of companies on the podium this year. We have a telecoms specialist at No.1, a straight hardware reseller at No.2 and a SaaS migration expert at No.3. A trio of tech companies striking success in different niches.

But the CRN Fast50 is not only about the top spot. We want to give credit to all 50 companies. I also want to make special mention of the two companies that have appeared all six years. Take a bow Blue Apache and Advent One – you’re in a class of your own.

The CRN Fast50 generates an awful lot of data, and I have strived to analyse it in some depth. But there’s one factoid you won’t find within any of our analysis – what separates these companies from the pack. How did they achieve such impressive growth at a time when many companies are only seeing revenues go the other way?

I like to think it’s a focus on the core values of IT companies: hard work, a customer focus and ability to innovate. The secret of success is not about a new model; it’s about the oldest rules in business.