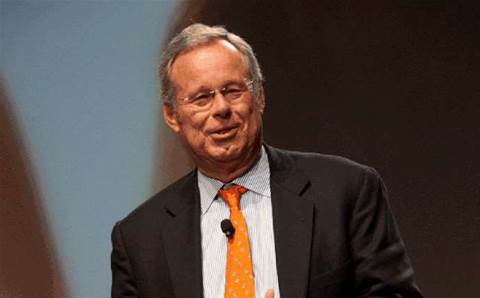 The chief executive of CSC said the merger of his company with a division of Hewlett Packard Enterprise will give his company the scale, skill and financials to allow it to "control its own destiny".

"This really takes us to a different level," Mike Lawrie said Tuesday afternoon on a call with investors following the release of CSC's Q4 2016 earnings report. "This deal allows us to get to the scale necessary to compete with anybody in the market."

Lawrie said that the merger with HPE’s Enterprise Services segment is the next logical step for both CSC and HPE following the spinoffs and restructurings that both companies underwent within the last year.

He said the deal will bring a global reach, an employee base with a "solid" skillset, a significant financial boost and a scale in next-generation technologies that will allow the company to adapt to a changing IT market.

"This merger gives us critical mass in growing segments like cloud, big data analytics and application development," he said, adding that growth in those sectors will offset difficulties both companies have experienced from the the declining number of legacy solution clients and the expiration of older contracts over the last few years.

Lawrie said that with the added scale from HPE's services segment, the new entity will be able to make the investments it needs in such areas as cloud and application development to assist large companies that are shifting their businesses to digital technology.

"This combination gives us a balance sheet and a financial structure that will allow us to help major clients around the world make that transformation into the digital world," he said.

Since splitting off its public solution provider business last November, CSC has been on an acquisition tear, acquiring Australian IT services company UXC Ltd in November, London-based outsourcing business Xchanging in December, cloud and service management consultant ServiceNow in May and – just this week, on Monday - European IT service provider Aspediens.

However, Lawrie said the small increments of growth CSC were gaining in next-generation services with each of those acquisitions are only a part of the "critical mass" the new entity will have moving forward.

"This move will catapult our business… this is all about creating a leadership position, a new foundation and a new starting point," he said.

The new company will be the largest pure-play IT services provider in the world with annual revenue of US$26 billion and more than 5,000 clients globally. It will be the third largest solution provider overall, behind only Accenture and IBM.

Lawrie said one of the largest benefits of the acquisition is that the companies don’t have many dis-synergies, noting that only less than 15 percent of the two companies' top 200 clients overlap.

"There are not many opportunities that come along and offer such a high amount of synergy," he said.

The new entity will be able to utilise solutions from both HP companies, Lawrie said. He added that with a broader portfolio of infrastructure, networking, storage and software, the new company will be able to better engage companies making the shift toward next-generation services.

"It's all about digital," Lawrie said.

Following the acquisition, Lawrie will take over as chairman, president and CEO of the new entity, while HPE’s president and CEO, Meg Whitman, will join the company's new board with the remaining board appointments split equally between the merging companies.