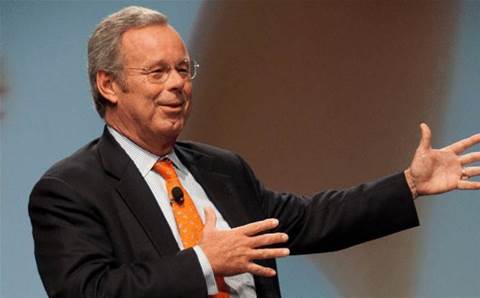 CSC chief executive Mike Lawrie will be running the company formed after the merger with HPE Enterprise Services.

The US$25.6 billion solution provider giant has named 38 of its senior leaders for the expected 1 April close of its mammoth merger, culminating a two-month process managed by one of the world's leading talent advisory firms. The leadership team draws from both CSC and HPE ES, the companies said, with executives tapped for their roles based on experience, performance, leadership qualities and cultural fit.

"Given the task ahead to realize our synergy plans and position NewCo [the new company] for industry leadership, it was a priority to assemble differentiated and proven talent ready to lead NewCo forward," Lawrie told investors on Thursday. The name and branding of the post-merger company will be revealed before the close of the transaction, Lawrie said.

The company has named all 17 executives who will report directly to Lawrie, NewCo's chairman, president and CEO. The 8-page letter from Lawrie and Nefkens to company employees was filed with the US Securities and Exchange Commission (SEC), and also details the new company's regional general managers, global industry general managers, global offering leaders and other key executives.

Executive search firm Heidrick & Struggles assessed talent from CSC and HPE ES as part of the company's organization design and selection process. The companies employed a combined 165,000 people at the time the deal was announced in May 2016.

Nefkens will be in charge of the new company's vision and go-to-market strategy as executive vice president and general manager of regions and industries. Nefkens will oversee the new company's primary profit and loss (P&L) drivers, which include six geographic regions, three vertically-integrated global industries, and the company's US public sector (USPS) practice.

The new company's combined worldwide sales force across all regions and industries will be directed by Larry Stack, who's currently HPE's senior vice president and global sales leader. Stack will report to Nefkens, and the regional sales leaders reporting to Stack will be announced in the coming weeks.

General managers for cloud, workload platforms and IT outsourcing; workplace and mobility; application services; enterprise and cloud apps; consulting; and business process outsourcing will all report directly to CEO Lawrie.

The new company will be organized into six regions: the Americas; the United Kingdom and Ireland; Central and Northern Europe; Southern Europe; the Middle East and Africa; and Australia and New Zealand. It will focus on the following industries: healthcare; insurance; travel and transportation; US public sector; banking; and client, account, and business operations.

In CSC's most recent quarter, which ended 30 December, the company reported that sales jumped to US$1.92 billion, up 9.5 percent from US$1.75 billion a year ago. That edged out the Seeking Alpha projection of US$1.9 billion.

The solution provider saw Global Business Services (GBS) sales skyrocket to US$1.05 billion, up 18.1 percent from US$886 million a year ago thanks to contributions from recent acquisitions and momentum from the company's business process services offerings.

Global Infrastructure Services (GIS) revenue inched ahead to US$871 million, up 0.8 percent from US$864 million a year ago due to contributions from recent acquisitions and growth in next-generation offerings such as cloud-based software solutions.