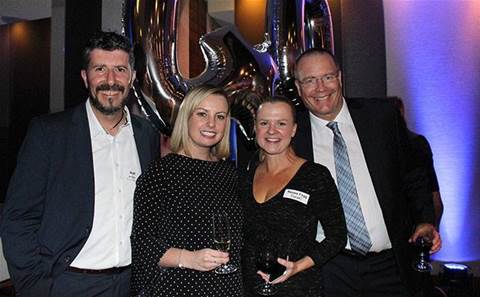 The year 1977 brought us the Apple II, Star Wars and the IBM 3033, a "compact new computer" that boasted a whopping 8MB of storage and cost a mere $4 million.

The year also brought us Powell, Clark & Associates, an early Australian information technology company founded in a garage in the suburbs of Brisbane. This was the birth of Data#3, a named coined when the startup merged with Allbrand Typewriters & Office Machines in 1984.

The Brisbane-headquartered IT solution provider has proved a lasting force in the Australian IT sector, rare in an industry where change is the only constant. Last night Data#3 celebrated its 40th birthday with staff, customers, vendor and distributors at a party in Sydney.

"I think 40 years of being in business in the IT industry is a remarkable achievement, absolutely remarkable," said Laurence Baynham, Data#3 chief executive and managing director.

What started with a few blokes in Brissie is now a national company with 1100 staff across 14 locations that could crack a billion dollars of revenue, having reported $506 million for the first half of 2017.

Baynham said: “Thank you to everyone who helped us to reach this 40-year milestone. From humble beginnings, Data#3 has risen to become Australia’s leading technology services and solutions company.”

It's been two decades since "another great occasion for Data#3": the year it floated on the ASX with a market capitalisation of $15 million. Today, the company is worth approximately $260 million.

Baynham said shareholders who stuck with Data#3 throughout those two decades – "and there have been some that have been with us all the way through the journey" – would have seen a 1700 percent return in share price and dividends. "Not a bad investment."

It was also 20 years ago, in 1997, that the Queensland company expanded south of the border into Blues country, NSW general manager Paul Crouch told party guests.

Crouch thanked Data#3's members of staff, many of whom have long tenures with the company. "I was thinking about what makes that happen over that period of time, and I think it's in part our culture. They come into our organisation because they see something in our culture they like."

Crouch said there was also a new generation within the organisation. "There's about 240 people here operating New South Wales, and the stats would say that nearly 60 percent of those are in fact younger than Data#3."