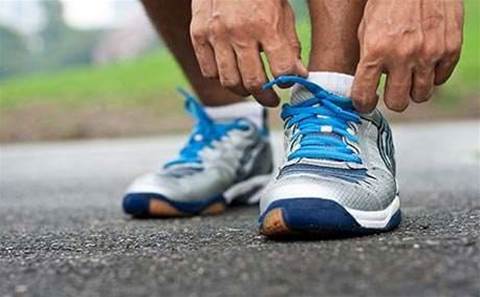 To top it off, Barclay will be doing the run dressed as DJ Lance Rock from kid's TV show Yo Gabba Gabba.

Over the course of 2014, he has been using each 21.1km slog as his "commute to work" at Data#3's head office in the Brisbane suburb of Toowong.

For tomorrow's half-marathon, Barclay is raising money for charity Day Of Difference, which supports critically injured children and their families. Donate here

The 52nd run will mark the culmination of his 2014 New Year's resolution.

"I wasn't a big runner a few years ago. After a few drinks on New Year's Eve, I said that my New Year's resolution was to run a marathon, and I did that in the Gold Coast Marathon in 2012.

"In 2013, I did the Gold Coast marathon again. But I was finding that I was doing all the training then the day after I would put the shoes away then coast the rest of the year to Christmas.

"So after doing that twice, last New Year's Eve I decided I would do 52 half marathons for the year, predominantly to use it as a commute to work."

Barclay hit a personal best of one hour 39 minutes five weeks ago, but is now carrying an injury into tomorrow's final slog. "Wearing a lycra suit suit in the heat, it will be slow one."

He added that he will be changing his route to run through Brisbane's CBD, so any CRN readers based in the Queensland capital should keep an eye out.