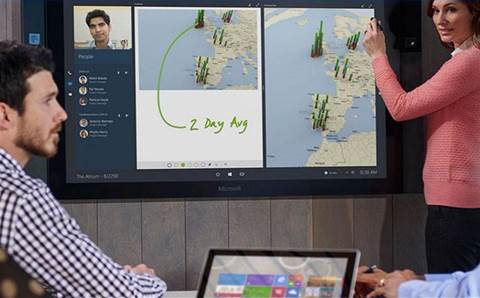 Microsoft has opened up its Surface Hub channel to include another 14 partners, bringing the total number of Australian partners that can resell the device to 21.

The new round of partners includes Skype for Business specialists Insync Technology, IComm and Nexon.

New partners that are Surface specialists, offering solutions with a range of Surface devices, are Ethan Group, CompNow, JB Hi-Fi Commercial and Datacom.

They will join Telstra and Pro AV Solutions, who were selected as the first two Australian Surface Hub partners in June 2015. The channel was extended to include Dimension Data, Data#3, Insight, Ensyst and Generation-e in August last year.

Microsoft employed a similar tactic for its Surface 2-in1 device range, which was restricted to just 14 Australian resellers, including CompNow, Ethan Group, Ensyst, Data#3, Insight, Datacom and Dimension Data. The Surface channel was opened up to 150 new partners in January 2016 after years of frustration from local partners.

Surface Hub has been gaining traction in the healthcare, manufacturing, automotive, consulting, defence, finance and education sectors, Microsoft said in a blog post. The vendor pointed to a Surface Hub rollout with the Central Highlands Regional Council as a recent win.

"By installing Surface Hubs across the region, the Council has created a platform for communication and collaboration that saves time and money - but it also ensures everyone’s voice from right across the region is heard. That’s no mean feat for a council running an area almost as big as Tasmania," Microsoft wrote.

Microsoft took the opportunity to announce some small additions to Surface Hub, including pre-loading of PowerBI, OneDrive and Photo apps, as well as inking support for Word, Excel and PowerPoint.