David Dicker: We hit a billion dollars this week 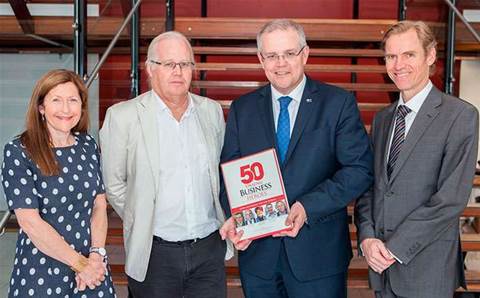 David Dicker was speaking at a book launch held at the distributor's headquarters in Sydney yesterday.

David Dicker, who appears in one of the book's chapters, told the guests: "Our original aim was to sell 10 computers in 1979. Yesterday we clocked over a billion dollars in sales in this company, so we've obviously come a long way."

He reflected on how he had built Australia's largest homegrown distributor. "We battled against foreign multinationals here from the start. They are better funded than we are, better resourced and we've been able to either pull ahead of them or hold our own or get bloody close to them and you only do that by staying in the game," said Dicker.

Dicker Data made its move to become the third-largest distributor in Australia – behind Synnex and Ingram Micro – after acquiring rival distie Express Data from owner Dimension Data in February 2014.

Scott Morrison, who wrote a foreword in 50 Unsung Business Heroes, praised Australian entrepreneurs, pointing out that the country is now run by an enterepreneur in the shape of Prime Minister Malcolm Turnbull.

"Entrepreneurs do many wonderful things," said Morrison. "They create incredible products and services that revolutionise how we all live. The other thing they do, which I think is probably the most important thing they do, is they give their fellow citizens a job. Once someone has a job they have choices. They have choices about their future. They can plan for their future by saving and investing. They can do things they couldn't so otherwise."

Grow your software revenue by selling these 5 affordable, essential tools for the modern workplace
By Steven Kiernan
Dec 10 2015
6:17AM