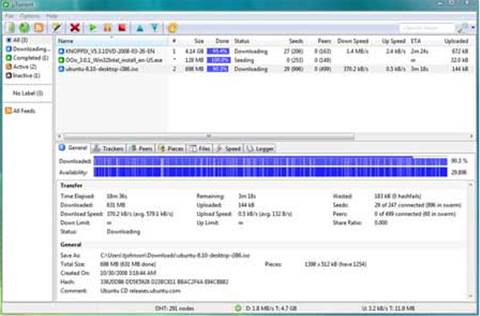 iiNet chief Michael Malone told the Federal Court yesterday he had "never used a BitTorrent client" but had a general understanding of the "mechanics" of how they worked.

Under cross-examination, Malone alleged he'd never seen a uTorrent client used by the film industry's barrister Tony Bannon in a technical demonstration in the Federal Court "other than in these proceedings".

Bannon used the uTorrent client version 1.8.4 in a demonstration of how one of three media releases on the iiNet site could be downloaded via torrent in addition to HTTP.

All three releases, dated between 20 and 26 November 2008, related to the court case.

"May we take it that you understood the release loaded as a torrent file was designed to be viewed by persons who had installed or could install a BitTorrent client?" Bannon posed to Malone.

"I take it you understood this [media] release was designed to be read by customers of iiNet?" Bannon pressed.

"Or anyone," Malone alleged. "It's a public media release. Any interested party [can view it]. It was available by HTTP but it was also available by torrent."

Bannon demonstrated to the court that when a user tried to access the media release torrent file, the file's dialogue box allegedly included a comment that the file was "not pirated in any way".

"You say that you don't understand how something could be added to the comment [field for something] that appears on your company's website?" Bannon said.

"I have next to no knowledge of BitTorrent clients," Malone alleged, adding his knowledge was focused more on the protocol than the client.

"I have no personal experience of this".

"You've sworn to that?" Bannon continued.

"You say to your internet customers out there that you, Michal Malone, don't understand this system? [You say] to your 400,000 customers that you don't really understand how BitTorrent works?"

"I think you're continuing to misunderstand [the difference between the protocol and client]," Malone stated.

Bannon twice revised his statement. "You do not understand how the BitTorrent client operates?" he asked.

"I don't understand how you would put a comment on a file," Malone alleged.

"But you otherwise accept that you fully understand how the BitTorrent client operates?" Bannon responded.

"There's hundreds of clients," Malone stated. "I'm aware of how the protocol works."

"And you're aware of how the BitTorrent client works?" Bannon asked again.

"And that's an answer to my question is it?" Bannon said. "Are you following my questions?"

"Then listen to me," Bannon stated.

Malone conceded he had a general understanding "from a mechanics point of view" how BitTorrent clients worked and that he'd understood "for years".

"Any suggestion to the contrary would be false, wouldn't it?" Bannon responded.

"Do you accept that a media release file was created by the use of a uTorrent client by someone within the iiNet organisation acting within the authority of their iiNet role?" Bannon asked.

Malone agreed, but he could not say specifically who had created the torrent file internally and said there was "no way to tell" if it was created on an iiNet computer.

He also could not shed light on who - if anyone - had allegedly instructed an iiNet employee to create a tracker log file, which was freely available on the internet. The log file was titled "Non Pirated Torrent Statistics".

But Malone stated it was "perfectly legal" to offer the media release via torrent.

Bannon pressed on: "As a significant internet organisation you're satisfied were you not that throughout 2007-8 there were people within the iiNet organisation with sufficient technical experience and kit to deal with uTorrent protocol and client?" he asked.

"If I'd made enquiries I'm sure there would have been," Malone stated.

Bannon continued his technical demonstration of the media release torrent file by alleging the ability to torrent the file had been removed in the past 24 hours.

"I certainly didn't request it be withdrawn," Malone alleged. "It's more likely an intermittent fault than a change of policy."

Malone continued: "How are you accessing the internet Mr Bannon?"

"I don't have that information," Bannon stated. "Why do you ask?"

"I wonder if [the inability to access the torrent file] is related to the connection to the internet rather than our site? Maybe there's a firewall in the court room?" Malone asked.