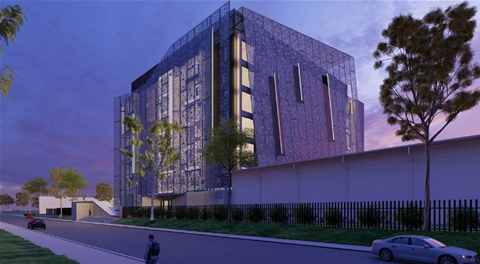 An artist render of the new DCI data centre in Sydney.

DCI Data centres has unveiled plans to build a 36 megawatt facility in the Sydney suburb of Eastern Creek.

DCI said its second Sydney data centre is scheduled for service readiness in the fourth quarter of 2022 and will cost $400 million to construct.

“The team are delighted to have secured this approval which will be a crucial part of our three-stage strategy for this key site,” DCI’s CEO Malcolm Roe said.

“We are also very excited to be leading the industry in delivering new cooling technologies to significantly enhance our power utilisation effectiveness and minimise our impact on the environment”.

The company said its continued investment into Australia would bring “significant benefits to the local economy via the creation of jobs throughout both the construction phase and ongoing operational management of the site”.

The announcement follows a recent deal in November between DCI and physical security vendor Inner Range to improve the data centre provider’s security posture and access controls in its facilities.

In September 2020 the company appointed Ras Scollay as its newest executive to drive the company’s expansion into Asian markets.

DCI said its expansion was enabled by the assets made available to the data centre operator through its parent company Brookfield Asset Management.

As part of this, DCI said at the time that Scollay’s role would be to lead the development of customer relationships and new market opportunities across Asia Pacific.

Eliminating departmental friction within MSPs
By Staff Writers
Jan 11 2021
10:24AM