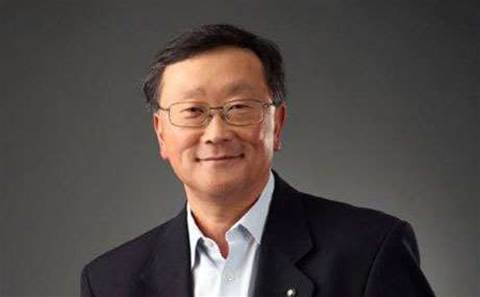 IBM's recent move to partner with Apple to sell iPhones and iPads loaded with corporate applications has excited investors in both companies, but two rivals say they are unperturbed for now.

Top executives at Dell and BlackBerry scoffed at the threat posed by the alliance this week, arguing the tie-up is unlikely to derail the efforts of their own companies to re-invent themselves.

"I do not think that we take the Apple-IBM tie-up terribly seriously. I think it just made a good press release," John Swainson, who heads Dell's global software business, said in an interview with Reuters in Toronto on Thursday.

[10 ways the IBM-Apple deal is momentous]

PC maker Dell and smartphone maker BlackBerry are in the midst of reshaping their companies around software and services, as the needs of their big corporate clients morph.

Swainson, who spent over two decades in senior roles at IBM, said, "I have some trouble understanding how IBM reps are going to really help Apple very much in terms of introducing devices into their accounts. I mean candidly, they weren't very good at doing it when it was IBM-logoed products, so I do not get how introducing Apple-logoed stuff is going to be much better."

While conceding that Apple products hold more allure, Swainson said they lack the depth of security features that many large business clients like banks covet.

IBM and Apple could not immediately be reached for comment.

BlackBerry chief executive John Chen similarly downplayed the threat of the alliance in an interview with the Financial Times on Thursday, likening the tie-up to when "two elephants start dancing."

Dell and BlackBerry declined to discuss whether they would consider teaming up, but some analysts, bankers and others have argued in the past that a partnership between the two underdogs potentially made sense.

Texas-based Dell has a huge sales team, vast network of business clients and is focused on growing its security and device management capabilities, long strong suits for BlackBerry.

The Canadian company is building on its heritage by adding capabilities to manage not just BlackBerry, but iOS-, Android- and Windows-based devices on its infrastructure.

"Dell's always been in a partnership-driven model. As Dell has evolved it has focused on some pieces of the equation, but not all," said Swainson, adding that the need to broaden partnerships is growing, but declining comment on a potential tie-up with BlackBerry.

Chen told the Financial Times that BlackBerry was in early discussions with some companies about working together in parts of the enterprise market, but did not name them.

Whether a BlackBerry-Dell partnership will materialise is unclear for now.

Initial speculation about a tie-up between the two began a year ago, when both players were exploring buyouts. At the time, one source told Reuters that BlackBerry had held talks with private equity firm Silver Lake Partners about collaboration in enterprise computing.

Silver Lake, along with Dell's founder, Michael Dell, were at the time in the midst of taking Dell private.

At the time, the source said if the buyout succeeded, one option was a collaboration with BlackBerry in mobile computing.

Both Swainson and Chen were senior advisors with Silver Lake before moving into their roles with Dell and BlackBerry.

BlackBerry, under the leadership of Chen, has been busy forging alliances and earlier this week announced it was going to allow third-parties to host its device management services.