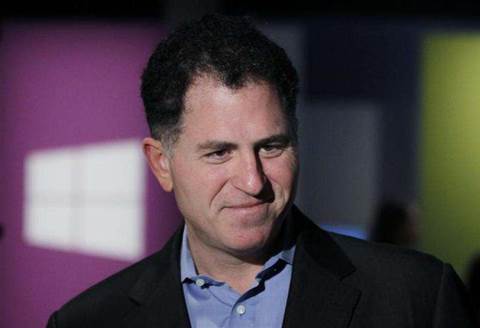 Dell CEO Michael Dell, aiming to clinch a $US24.4 billion deal to take the No. 3 PC maker private, agreed to value his 16 percent stake in the company at about two percent below the price offered to other shareholders, company filings revealed.

The founder, who informed his board in August of his intention to remove the struggling company from Wall Street's scrutiny, agreed after extensive negotiations that his equity stake would be valued at $US13.36 a share, versus the $US13.65 offered eventually.

"To facilitate a price increase by Silver Lake, Mr. Dell and related persons agreed that their shares to be rolled over in the proposed transaction would be valued only at $US13.36 per share as opposed to the $US13.65 price offered to the company's unaffiliated stockholders," the filing read.

The proposed leveraged buyout, the largest private-equity backed deal since the financial crisis, is being led by Michael Dell and Silver Lake, and pits Dell's board against the company's top independent investors.

Top two shareholders, Southeastern Asset Management and T. Rowe Price, have been among the most vocal opponents of the deal, which they say severely undervalues the company, despite the challenges it faces in a shrinking PC market and intense competition in enterprise software and services.

The deal is up for a shareholder vote around June or July, the company said in Thursday's filing. It will need a majority of shareholders, excluding Michael Dell, to be approved.

Dell's board, which formed a special review committee of independent directors after the CEO informed them of his intentions, is now conducting a 45-day "go-shop" period, actively soliciting higher bids.

Analysts do not expect rival bidders to step forward.

Dell reports fiscal fourth-quarter results next week, when analysts get their first chance to grill management on the buyout. But, in a potential disappointment for Wall Street, Michael Dell himself will not be present.  He has typically participated in post-earnings release calls.

The CEO excused himself from the discussion, given his leading role in the buyout, a company spokesman said.

Dell has lost 40 percent of its value since last year's peak, and is trying to reinvent itself as a seller of higher-margin services to corporations, an internal overhaul that would be conducted away from public scrutiny if the buyout goes forward.

The PC maker, whose profits fell 47 percent last quarter, is expected to report further erosion of both revenue and income next week.

Dell's revenue in the quarter is expected to slide almost 12 percent to $US14.12 billion from $US16.03 billion a year earlier, according to an average forecast of analysts polled by Thomson Reuters.

The company, once the world's top PC maker and a pioneer in computer supply chain management, is struggling to defend its market share against Asian rivals like Lenovo.

It was hurt also by a slide in holiday-season sales of personal computers for the first time in more than five years, despite the launch of Microsoft's Windows 8 operating system. Microsoft itself is providing $US2 billion in financing for Dell's buyout.

Dell's worldwide PC shipments fell nearly 21 percent to 9.48 million in the last three months of 2012, from 11.97 million in the same period a year ago.