As the technology markets and global economy slowly emerge from the devastating COVID-19 pandemic, one lasting impact on compute and storage IT infrastructure is customers’ reliance on cloud platforms and as-a-service delivery models, according to new research from IDC.

The pair of vendors generating the most sales from cloud infrastructure spending are the two worldwide leaders in servers and storage: Dell Technologies and Hewlett Packard Enterprise, which combined captured 28 percent of the US$15.1 billion worldwide market in the first quarter of 2021. 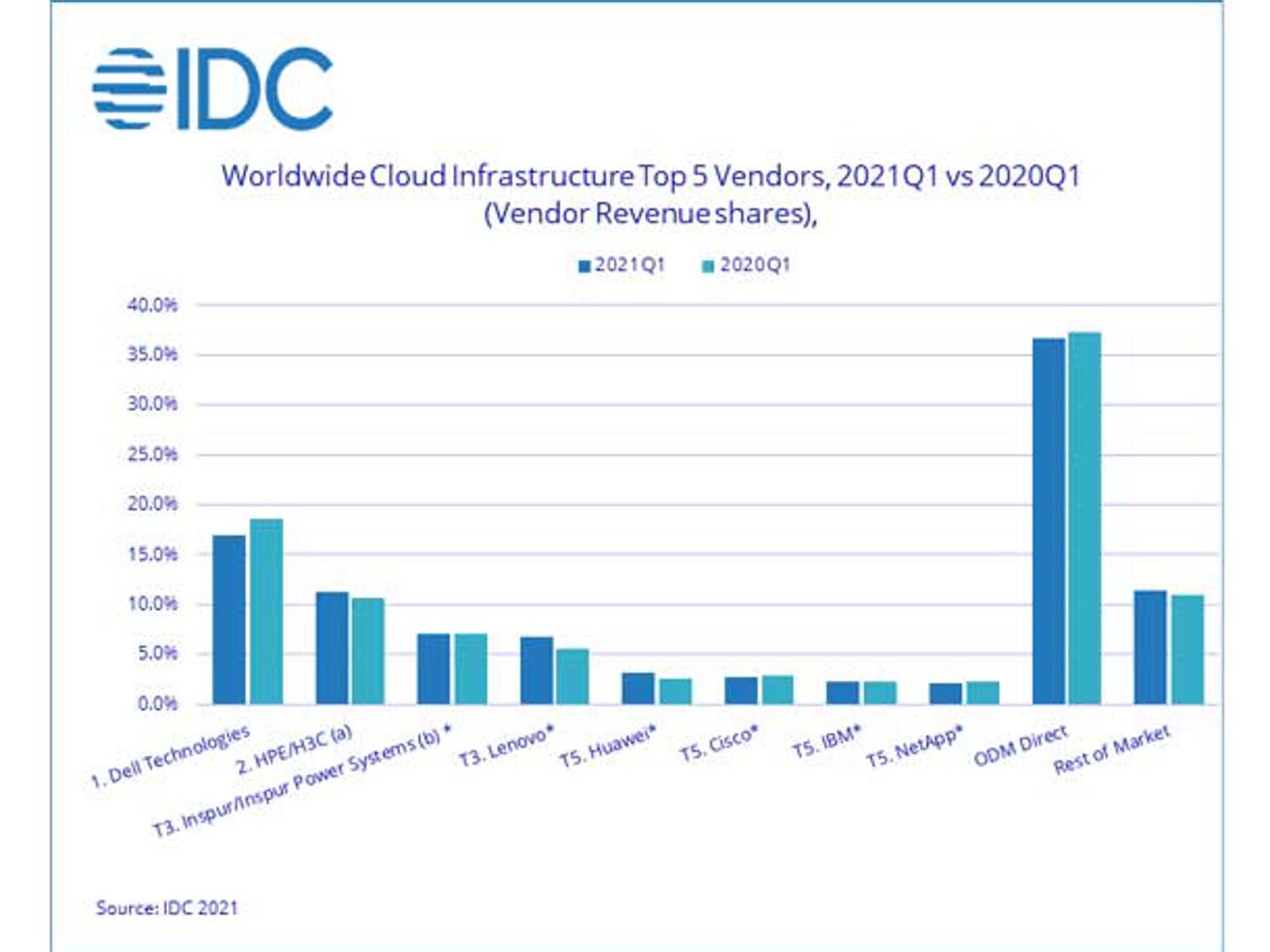 However, HPE, which ranked No. 2 in market share, grew cloud infrastructure revenue faster compared with Dell. Spring, Texas-based HPE captured 11.2 percent share by generating US$1.64 billion in cloud infrastructure sales in the quarter, up more than 18 percent year over year. Due to HPE’s existing joint venture with China-based H3C, IDC combines market share and sales for both HPE and H3C.

China-based Inspur won 7 percent share of the market by generating approximately US$1 billion in compute and storage cloud infrastructure sales, up nearly 12 percent year over year.

There is a big drop-off in terms of market share after Dell, HPE, Inspur and Lenovo. These four vendors’ combined worldwide market share is approximately 42 percent.

The final four leaders in cloud infrastructure sales in the first quarter of 2021 are Huawei, Cisco Systems, IBM and NetApp.

Cisco, the longtime dominant worldwide leader in networking, based in San Jose, Calif., captured 2.7 percent share of the market with cloud infrastructure sales of US$393 million, up 5 percent year over year.

NetApp, a Sunnyvale, Calif.-based storage star in North America, captured 2.1 percent share by generating US$305 million in revenue, up 1 percent year over year.

The rest of the market was led by original design manufactures (ODMs). IDC combines all ODMs in terms of cloud infrastructure revenue. ODMs design and manufacture servers and storage products that are later rebranded by other companies for sale, with a sizable portion going directly to the world’s largest cloud and hyperscale data center providers.

In total, ODMs generated US$5.36 billion in cloud infrastructure sales in the first quarter, up 10 percent year over year. ODMs captured over 36 percent of the global market share.

Looking ahead at the full-year 2021, IDC is forecasting cloud infrastructure spending to grow roughly 13 percent to US$74.6 billion in 2021. IDC predicts non-cloud infrastructure will grow over 2 percent annually to US$58.5 billion, following two years of declines.

With healthy first-quarter 2021 results and the overall infrastructure market beginning to recover from the COVID-19 pandemic, the future looks bright for vendors selling billions in cloud infrastructure this year.

In terms of first-quarter spending based on geographic regions, the highest annual growth rate was in Canada, up 40 percent; followed by China, up 35 percent; then Asia-Pacific—excluding Japan and China—at 29 percent growth.