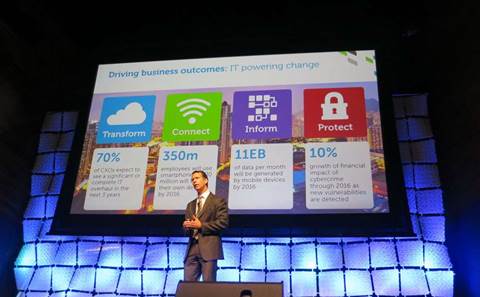 Channel manager Peter Murphy said Dell only competes with its partners in Australia in 10 to 15 percent of cases and that it has systems in place so partners don't compete against each other.

"We have a robust engagement model where [channel partners] will register the opportunities they're pursuing. Roughly 85 to 90 percent of our registrations get approved."

Murphy told CRN that Dell has acquired 19 companies in four years as it transitioned from a hardware manufacturer to a full solutions provider, adding that channel partners remain critical to Dell's success.

"Partners deliver one-third of our revenues on a global level. We absolutely see them as critical to our success. We've made significant investments not only in headcount but also in resources."

The company has two partner showrooms in Australia and is opening a third in New Zealand.

"We have solution centres around the country where they can bring their customers and showcase proof of concepts, to present demos or do some retail workshops," Murphy said.

Founder Michael Dell recently acquired 75 percent of the company for US$24.9 billion in an effort to prompt the company's transformation to an end-to-end solutions provider.

Australian managing director Joe Kremer said: "It's early days, but the level of energy and excitement that you see in Michael personally is fantastic. When you own 75 percent decision making happens very rapidly. Things happen blindingly fast."

The vendor is also shifting from a pure hardware to services focus, he said, adding that Dell's business "in Australia is more than 50 percent services".

Dell VP and GM of enterprise solutions group, Phil Davis, said the company generates "roughly a third of revenue from the enterprise space".

At the forum, Davis also presented in-house research suggesting that 70 percent of CIOs "expect to see a significant or complete IT overhaul in the next three years".

Dell recently announced a new Partner Advisory Council in Australia to aid its focus on local sales and strategies.

The APJ Partner Advisory Council, which will also include members from China, India and New Zealand, will advise Dell on business priorities, sales and local strategy.

The APJ Partner Advisory Council will be established in the first half of 2014.

These changes represent a substantial shift from Dell's historic image as primarily a direct-to-customer PC vendor.

Dell has been hit hard by the fall in PC sales, with its third-quarter hardware shipments down 14 percent, according to market data from Gartner.