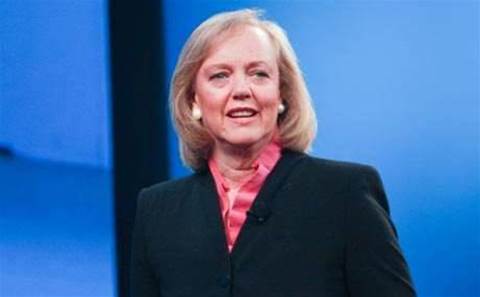 Asked whether HP might make a stronger play for the tablet market, Whitman initially responded by pointing to the company's "strong" enterprise business. She then dismissed the idea that the PC might be dead.

"In our commercial business, we have a tremendously strong lineup," she told CNBC. "We can go from virtual desktop to workstations to desktops – by the way, desktops are not dead – to laptops, to hybrids, to tablets for the commercial enterprise."

Whitman was more cautious when it came to the consumer market, however.

"We do play in the consumer business - this is much more competitive with very low price points, so we’re going be careful about where we play and how we’re going to win because there’s no point in not making money," she said. "We have to segment the market and be thoughtful about it."

But she revealed that HP would soon expand its line-up of convertible laptops, with the company working on a new hybrid for consumers. She gave no details on pricing or availability.

"There are going to be some changes in this marketplace and we hope to be a competitive force," she added.

Despite Whitman's optimism, HP has struggled to maintain growth as PC sales slide. The firm is vying with Lenovo for the top spot in the PC market, but reported a 2% dip in revenue for its PC-focused unit to $US8.58 billion in its most recent quarter.