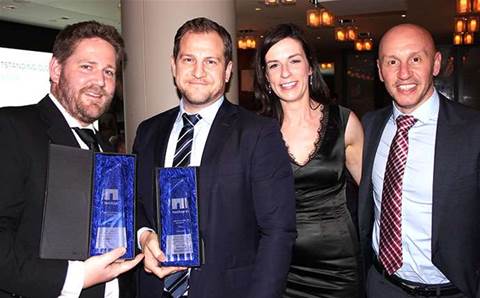 NetApp's ANZ business grew 19-20 percent in the financial year to April 2015, bucking a backwards trend in the storage market.

NetApp Australia & New Zealand managing director Steve Manley thanked the company's "committed, educated and passionate partners" for the growth during his speech at the vendor's first-ever ANZ Partner awards ceremony, where Dimension Data and Flexdata were two of the big winners.

[Check out photos from the awards]

The intimate affair at the Park Hyatt in Sydney brought together some of the channel's top infrastructure providers.

Another standout performer was Sydney's VMtech, which scored two awards, one for Converged Infrastructure Excellence and an individual Technical Excellence award for Jon Dawes, not to mention being a finalist to giant Dimension Data in the Platinum category.

Telstra was named New Reseller of the Year for its NetApp and Cisco FlexPod productisation initiative and "outstanding first year revenue growth".

The Service Provider of the Year gong went to Interactive, which has built the largest exclusively NetApp powered cloud infrastructure in Australia.

Sydney-based Katana1 won the Customer Intimacy award. The company was No.2 in the 2013 CRN Fast50.

Nexon Asia Pacific was awarded for Outstanding Cloud Initiative. The Sydney company has sunk $5-6 million into its Agile Business Cloud, which combines Office 365 and telephony solution built on a NetApp powered cloud. ABC was also recognised with a global NetApp award.