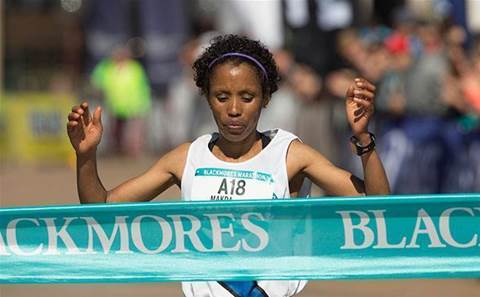 Dimension Data brought a pared-back version of its sports analytics practice to Sydney on Sunday to capture data during the Blackmores Sydney Running Festival and share it with TV viewers.

Cyclists carrying Android devices that captured their speed and location kept pace with the lead pack and chasing pack for both the men's and women's marathon on Sunday. The major event attracted more than 33,000 participants from 66 countries to take part in the 42km marathon, half marathon and 10km Bridge Run.

Data was fed back to an IBM analytics engine hosted in Dimension Data's managed cloud platform in Sydney.

The analytics engine is based on IBM technology as well as open-source applications such as Apache Spark and MongoDB, according to Peter Gray, senior director of Dimension Data’s sports practice.

A real-time, low-latency data stream delivered information every two seconds, which was handed off to Channel 10 for its broadcast, while separate batch-processing data allowed the Dimension Data team to provide more detailed analysis and analytics, Gray explained.

The men's marathon was won by Japan's Shota Hattori in a time of 02:15:16, while Ethiopian Australian Makda Harun Haji took out the women's race in a time of 02:28:04 to set a new course record. 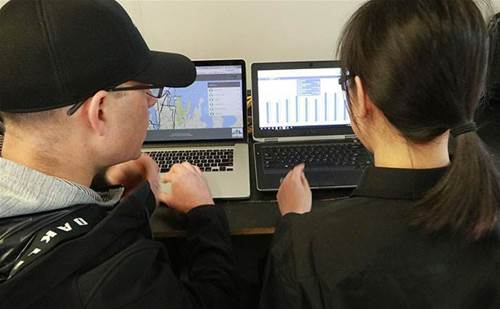 "During the race, more than 27,000 data points were captured and processed with data flowing live to the television graphics, as well as into an analytical data store for more detailed race analysis," Gray said.

"By using a combination of cloud, collaboration, mobility, IoT and analytics technology we are able to support Sydney marathon using the same technology as we use to provide live data, insights and predictions for our enterprise customers."

Dimension Data had a small team working onsite and remotely to support the Sydney race, accessing the analytics technology through a browser, said Gray.

"Essentially, for an event like this we run a lightweight version of what we do at the Tour [de France]. We heavily make use of the cloud platforms because of the incredible flexibility."

Dimension Data's sports practice was first established to cover the 2015 Tour de France, and has continued to support the cycling event along with events including the ITU World Triathlon in Japan, Tour of Britain and, for the second year, Blackmore's Sydney Running Festival.

The global practice has a local flavour, run by an Australian in Peter Gray and leveraging capabilities from the 2014 acquisition of ASX-listed Oakton.

Cloud application revenue made easy
By Steven Kiernan
Sep 18 2017
6:30AM