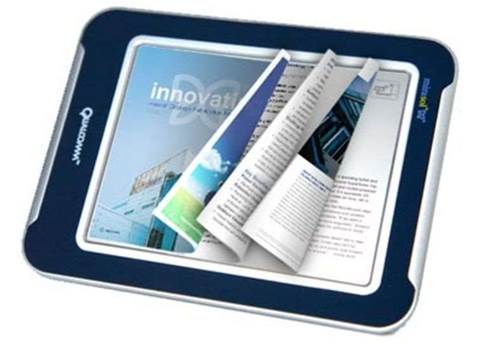 Researchers working on a colour display technology for eBook readers have said it will include touch abilities.

Mirasol, developed by Qualcomm, is being talked up as a promising display technology because it boasts the same low-power consumption offered by E Ink, but is also capable of displaying colour - which that system has yet to provide.

“This is not surprising for anyone following trends in consumer technology," she said. "Two types of touchscreen technology integrate with Mirasol displays: project capacitive and optical touch.”

“Right now, projective capacitive is the current industry standard, while optical touch technology is an emerging approach that uses infrared to pinpoint where on the display a user is touching.”

Optical touch has, for example, been used in the recently launched Sony eBook readers.

Mirasol is a micro-electro-mechanical system that reflects light and colours from its surroundings to produce an image that requires no backlight. As well as touch and colour, Qualcomm says the technology can also display video.

Grow your software revenue by selling these 5 affordable, essential tools for the modern workplace
By Stewart Mitchell
Oct 25 2010
8:20AM