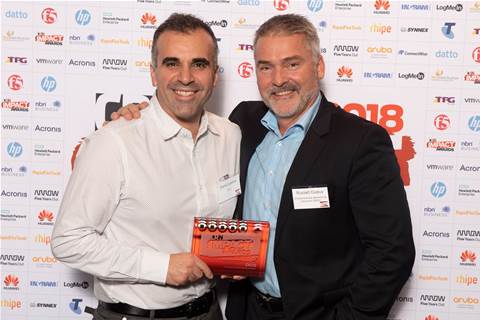 Melbourne-based software house DiUS has claimed a big double win alongside 10 other technology providers taking home awards for transformational customer projects during a gala dinner in Sydney on Thursday night.

The 2018 CRN Impact Awards, which were held as part of the Pipeline conference in Manly, recognised IT providers and Australian innovators for leading technology projects and building intellectual property delivering real benefits to Australian customers.

[Submit an entry for next year's CRN Impact Awards now!]

The awards night was the culmination of months of submissions and judging by the CRN editorial team and a group of respected industry judges, who whittled the significant number of entrants to just 12 winners.

DiUS’ first win of the night was in the Customer Experience category, for delivering a transformative chatbot solution to health insurer NIB, which improved the efficiency of the customer organisation, as well as the customer’s customers.

DiUS also took out the Digital Transformation category for a game-changing IoT and application solution in fuel monitoring for Environmental Monitoring Solutions that has rolled out to more than 1000 service stations across Australia, delivering estimated savings to retailers of $2 million in maintenance spending.

Melbourne-based DiUS, which was accompanied by both partner organisations at the awards night, has fast become a veteran of the CRN Impact Awards, having also taken out the Customer Experience category last year.

For the Modernising Infrastructure award, which was divided between enterprise and mid-range projects, Thomas Duryea Logicalis and Combo were the respective winners.

Thomas Duryea Logicalis took out the enterprise gong after completing an ambitious IT rollout for the City of Casey, which included an overhaul of networking, telecommunications, AV integration; security, data and cloud across 70 sites.

Combo was named as the mid-range winner of the Modernising Infrastructure category for helping Workways Australia migrate from a distributed server model and aging infrastructure to a hybrid cloud model in partnership with Telstra. This provided significant improvement in the performance of the Workways Australia business across 44 sites in Australia.

Outware Mobile took out the Workforce Empowerment category for digitising a paper-based reporting system for food regulator Safe Food Production Queensland, improving the efficiency of data collection and allowing the organisation to improve the processing of poultry and red meat in Queensland.

The Exporting Innovation award, which celebrates Australian tech firms that have developed their own intellectual property, commercialised it and won export sales from international customers, went to Melbourne’s Envato for creating a marketplace allowing creatives to source and sell assets, with customers in nearly every continent from Europe to South America and North America to Asia.

The Emerging Innovator category recognises up-and-coming Australian companies that have developed their own IP and are successfully commercialising it. The winner of this category was startup Reekoh for its leading IoT data and API management platform, designed to help enterprise customers manage the complexity of IoT solution components and accelerate IoT adoption.

Taking out the Evolving Innovator category was Cohesio Group, which started its life as VoiceID, a systems integrator, for its development of Ignito, a powerful piece of software that enables workflow optimisation and task automation for retail stores, including customer happy customer My Chemist.

The Evolving Innovator category is aimed at Australian solution providers, such resellers, systems integrators and MSPs, that have diversified by building their own intellectual property around a third-party platform.

Winning the Network Evolution category for achievements in connecting systems was Airbridge Networks, for its delivery of a wide area network to the Northern Peninsula Area Regional Council. Airbridge’s rollout, which has connected 18 out of 20 NPARC sites so far, has brought new communication capabilities and cost savings to the widely spread community.

The Trusted Systems was won by OBT, which provided client Planet Plumbing a high-end, Citrix-hosted desktop with email and Office for its 300 users. The solution was equally as agile and fit for purpose as Planet Plumbing’s previous hosted desktop solution, while emphasising cybersecurity and slashing costs by at least 70 percent.

The win also made it back-to-back wins for OBT, which took out the Workplace Empowerment category in 2017.

Specialist IT distributor Alloys took out the Distribution Performance category after it created a highly successful campaign for Canon large-format printers that included training programs around Australia, the creation of a new online comparison tool and marketing support.

Mangano IT and Telstra took the win in the Working Together category. Working Together awards companies that deliver a solid customer outcome through collaboration with other channel partners.

Mangano IT deployed a Datto disaster recovery and backup solution for Whitsunday Regional Council’s sites at Proserpine and Bowen. The project was kicked into overdrive when cyclone Debbie was forecast to hit the region near the council’s main site. As danger approached, the partners demonstrated true collaboration, holding twice-daily meetings to make hour-to-hour decisions on when the final backup would be sent and when a virtualised environment would be switched on.

You can check out all of the finalists from the 2018 CRN Impact Awards at https://www.crn.com.au/impactawards, and nominations for the 2019 Impact Awards will open shortly.

Cloud application revenue made easy
By Michael Jenkin
May 4 2018
7:00AM