Diversity is nothing without inclusion: Red Hat exec 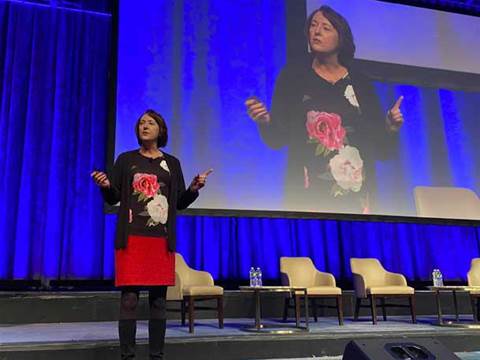 Being a diverse company isn’t enough, according to Margaret Dawson, vice president of diversity, equity and inclusion and chief of staff to the CEO at Red Hat. What really matters is including those people with diverse backgrounds, showing empathy for them and acknowledging that harm has been done.

Dawson spoke at The Channel Company’s Women of the Channel event about how companies can be more inclusive and the steps they can take to start today.

“DEI [diversity, equity and inclusion] is not a new topic, but why is it that it feels like nothing’s ever changing?” she asked. “This work is really complex and it changes constantly.”

And diversity is a global problem.

“Diversity and what it means is different in every country, in every region,” she said. “So how do we think about this on a global scale?”

The journey to diversity and inclusion begins with individuals and a hard conversation they must have with themselves, she said. They need to ask these questions of themselves, according to Dawson: What are my unconscious biases? What is my privilege, or not? Who am I? Am I helping others? Am I being judgmental? Am I empowering others?

When taking on her role as the vice president of diversity, equity and inclusion, the first thing Dawson did was listen, and it was hard. Next, she had to acknowledge that there has been harm done.

“I never truly internalised that as a company we had to say, ‘I acknowledge there has been harm and this makes it very hard for you to do your job,’” she said. “We really do have to understand the challenges that people have experienced and continue to experience every single day. We probably need to say, ‘I’m sorry.’”

But a big lesson she learned is that diversity doesn’t work without inclusion.

“We keep talking about diversity, but if we don’t focus on the environment and creating an inclusive, welcoming, safe place, those people just walk back out,” she said.

Inclusion is not bringing people into something that already exists, it’s about creating a new space for them, Dawson said. Don’t bring them to your table, she added, but create a new table for them. Bringing in people with diverse backgrounds doesn’t just mean including them, she said, but showing empathy and curiosity.

“If they feel attacked, if they feel like this is us versus them, they will not be on this journey,” Dawson said. “The problem is everyone is not included and we do not have enough people from under-represented populations in the most marginalised groups able to participate in an equal way.”

Another term that was new to her was “psychological safety,” which is feeling safe to show up as your authentic self without fear. That pertains to gender as well, she said.

“One change can make such a difference, and the right words really matter,” she said. “Is it really that hard to respect someone‘s identity?”

Whether they’re she, he or they, respect what each individual would like to be called, Dawson said.

“The value in learning how to help someone be who they are and treat them with respect based on their identity is the best thing you can do,” she said.

And all of this takes intention, Dawson said. People need to have crucial conversations that no one likes to have, and that includes apologizing to someone if you said something wrong, calling out bad behaviour and being an ally.

All of these can be woven into a company’s strategic goals just as products and services are, she said. That’s the only way diversity, equity and inclusion will truly work.

Marisol Gonzalez Orellana, director of Latin America marketing for Palo Alto Networks, learned that it’s important to understand the challenges that others have experienced.

In her role, she manages more than 30 countries, so in listening to Dawson she thought about how she can make sure that all voices on her team are heard.

“Diversity doesn’t just mean we’re going to hire a lot of people from different backgrounds,” she said. “It’s about making them feel included; the inclusion part of it really stuck with me. I can attest that that’s really important in our culture.”

Grabbing the hybrid cloud opportunity with Lenovo and Azure Services
By C.J. Fairfield
Dec 9 2021
6:42AM