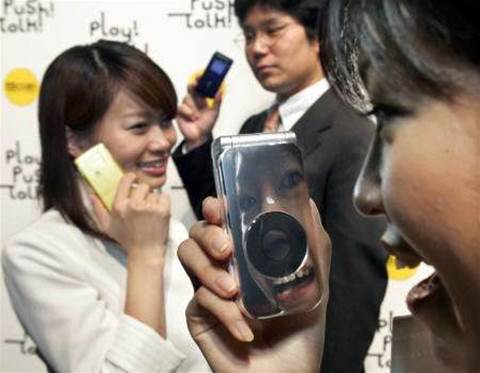 TOKYO (Reuters) - NTT DoCoMo, Japan's largest mobile operator, on Wednesday unveiled a new line of high-speed phones with a walkie-talkie feature that was first made popular in the United States.

DoCoMo said its winter lineup of six 3G (third-generation) phones would include the function known as "push-to-talk", which lets users talk to a group of people at the same time with the push of a button rather than dialing a phone number.

Telecoms operators worldwide see the feature as a potential new source of revenue in increasingly saturated markets. The feature has allowed US mobile operator Nextel to gain a loyal following of business customers and report one of the US industry's highest average revenues per user.

DoCoMo said it planned to target both consumers and business users with the new service, which it dubbed "Push Talk".

DoCoMo said there would be a delay of about two seconds before a receiver hears what the speaker said.

The new 3G phones, by companies such as NEC, Matsushita Electric Industrial and Mitsubishi Electric, will be rolled out in time for the December bonus season when many consumers have extra cash to spend.

DoCoMo declined to comment on the price of the phones, but they are expected to be priced in line with its new 3G phones in the past, which were in the 30,000 yen range.
Got a news tip for our journalists? Share it with us anonymously here.