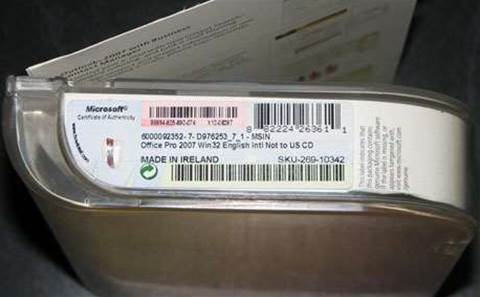 Microsoft's legal campaign against software pirates has seen the vendor launch at least six cases of copyright infringement in the Federal Court this year, and at least one recent win.

Paul McLane, trading as Software Paul, was recently ordered to pay $4995 in compensatory damages, plus $300,000 in additional damages, for what the software vendor said was due to the "flagrancy. of [his] repeated infringements of Microsoft software copyright".

Microsoft Australia said in a statement McLane had been indentified by its intellectual property investigators as selling counterfeit copies of Windows and Office during sweeps carried out in 2012 across Melbourne.

McLane had turned off updates on all four copies of Windows in an effort to avoid detection. Some of the software was also infected with malware.

"The court found Paul McLane to be a repeat offender who previously had 1473 counterfeit discs seized by the Victorian Police in 2005 and a further 799 in 2006. Furthermore, the court held that Paul McLane had blatantly infringed Microsoft’s copyright as early as 2006 and continuing up until June 2013," according to Microsoft.

The case followed an even heftier ruling against Joses Antonio Caceres Melgar on 24 May, in which the respondent was hit with compensatory damages of $164,624 and additional damages of $300,000.

Not every case ended in a major fine, with Vuddei Sayon ordered to pay just $4,627 on 6 September and a case against Raman Partap, trading as RPDIRECT2U, finalised without costs.