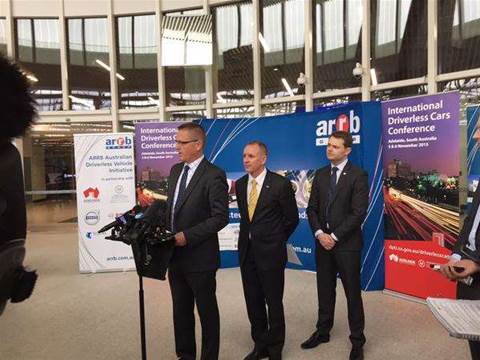 The first demonstration of autonomous vehicles on a closed-off Adelaide expressway will be held in November this year in a trial led by the Australian Road Research Board.

Volvo has partnered with the ARRB and the SA government to send an as-yet unspecified number of its new XC90 vehicles, equipped with its autopilot system, down the city’s southern expressway under controlled conditions.

The Volvos feature automatic braking, steering and parking via sensor-linked software, as well as a fail safe mode that will pull the car over to the side of the road if something goes wrong and the human driver is unable to take control of the vehicle.

The test drive will assess whether existing driverless technology needs to be tweaked for the idiosyncrasies of Australia roads, including the local climate and traffic conditions, road infrastructure, marking surfaces and state-by-state signage and road rules.

ARRB managing director Gerard Waldron told iTnews the trial would most likely see the south-bound lane of the expressway temporarily closed. He said normal drivers will also be involved in the trial to simulate standard road conditions.

Volvo is already testing the vehicles on the open road in the Swedish city of Gothenburg, near its headquarters.

Waldron said the ARRB was looking to recruit other car manufacturers into the November trial, in addition to an existing group that includes Telstra, Cohda Wireless, car components manufacturer Bosch and Flinders University.

He is hoping the showcase will catch the eye of lawmakers nationwide, who will eventually need to decide on new road rules that will make or break the adoption of driverless vehicle technology in Australia.

Most of the technology that allows the Volvos to drive relatively autonomously is already built into its late model vehicles, he said.

“Legislative reform is part of what we are trying to get started here,” Waldron said.

“There are quite a number of regulatory barriers to this technology. They don’t all have to come down overnight, but we do need our governments to start thinking about these issues now.”

South Australia has already positioned itself as the nation’s most vocal proponent of driverless vehicle technology, having flagged upcoming changes to the state’s road rules that would pave the way for autonomous cars on public roads.

Waldron and the ARRB are now pushing for other states to host their own trials.

The Adelaide trial will coincide with a driverless vehicle conference hosted by the SA government on 5-6 November.

Grow your software revenue by selling these 5 affordable, essential tools for the modern workplace
By Paris Cowan
Jul 22 2015
12:25PM