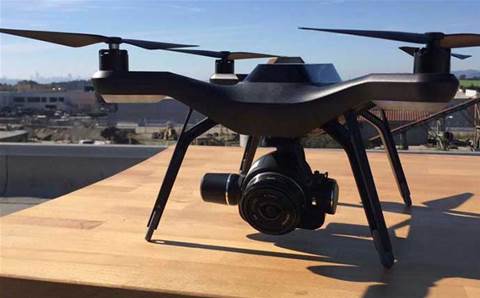 The fledgling drone industry is in the throes of change as weak consumer demand and falling prices drive startups to shift their focus to specialised business applications.
3D Robotics, an early drone startup that raised more than US$125 million (A$165 million) from investors, has seen its consumer business all but crash. This week, it unveiled a new commercial strategy, announcing a camera-equipped drone with imaging software designed for construction companies.

GoPro Inc this week announced a recall of about 2500 drones for a refund after just a couple of weeks on the market - some units had sudden power outages - and didn't say when it would offer a replacement product. Europe's Zano, which made mini-drones for consumers, shut down last year.

While many drone-makers overestimated demand from hobbyists, they now see big opportunities selling to businesses under newly relaxed US regulations. Beyond flying robots, investors and entrepreneurs see especially strong prospects in software and services that can make aerial imaging useful for industries including insurance, construction, agriculture and entertainment.

Companies including Amazon.com and Zipline, a drone startup, are also aggressively developing drones for delivery.

Most startups vying to sell consumer drones, often used for racing or photography, have been stung by China-based DJI. The company has dominated by slashing prices. DJI discounted its popular Phantom 3 drone, for instance, to about US$300 from nearly US$1000 at the beginning of the year.

3D Robotics took a beating after releasing its Solo consumer drone last year for about US$1500, said co-founder and CEO Chris Anderson.

"It's no fun watching prices fall by 70 percent in 9 months," Anderson said, referring to DJI's price-cutting.

After shuttering warehouses and factories and laying off scores of employees, Berkeley-based 3D Robotics has all but scrapped its consumer business, Anderson said, despite having a backlog of drones sitting on Best Buy stores shelves. They now sell for one-third of their original price.

The chill is being felt widely. Venture capital financing for drone companies fell 59 percent in the third quarter, to US$55 million from US$134 million in the previous year, according to data research firm CB Insights. The drop reflects a widespread funding slump across the tech sector but also heightened caution about drone companies.

Any new company trying to compete with DJI on consumer drones would have "an extraordinarily difficult argument to make" to venture capitalists, said Rory O'Driscoll, a partner at Scale Venture Partners.

"Consumers buy drones, and it's a disposable item," he said. "They play with it, and then they are done."

DJI, which eclipses many Silicon Valley startups with a workforce of 6000, began making commercial drones and pursuing software development more than a year ago.
"Four years ago, it was enough to take something out of a box, you push a button and it flies," said Adam Lisberg, DJI spokesman for North America. "The smart money is now in drone services."

The industry's excitement about business applications stems in part from new Federal Aviation Administration rules, which took effect in August and offer a clearer pathway for commercial drone uses, though many restrictions remain. The new rules simplified licensing requirements, making it possible for small companies to certify themselves to operate commercial drones.

3D Robotics' new plan is to outfit the Solo with new technology to capture 3D images that show the shape, size and volume of items at a construction site.

The company joins startups such as DroneDeploy and Airware that are focusing on software to make sense of images, whether it's the angle of a pipe laid at a new construction site or damage to a roof from a hurricane. The drone itself is almost an afterthought.

A report in May from consulting firm PricewaterhouseCoopers estimated that, by 2020, about US$127 billion worth of labor and business services could be replaced by drones. A separate report released the same month from Grand View Research projected annual sales of consumer drones globally at just US$4.19 billion by 2024.

That doesn't mean launching commercial drone businesses will be simple. Trimble Inc., which makes global positioning devices, last month spun off its line of Gatewing drones.
Alphabet Inc has also pushed our managers and cut funding for commercial drone project, according to a Bloomberg report this week.

And some industry experts are skeptical about 3D Robotics' plan to upgrade a hobby-grade drone for commercial use.

"It might be too little too late for 3DR," said industry analyst Patrick Egan. "They aren't the only company that is going to have problems."