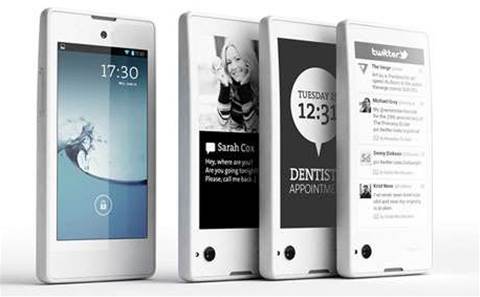 Smartphone displays aren't only getting larger, they're multiplying, with the arrival of the YotaPhone - which features a secondary e-paper display on its rear.

Created by Russia's Yota Devices and first unveiled at Mobile World Congress earlier this year, the YotaPhone will go on sale this year in Russia, Austria, France, Germany and Spain for €499. It will be available then in the UK briefly next year, but there's no word for outside of Europe at this stage.

The YotaPhone features an always-on, 4.3in, e-paper second screen on the rear, to display such information as emails, texts and other notifications without requiring the user to wake up the main LCD screen, thereby extending battery life. It can also be used as an ebook reader.

"One thing is fundamentally wrong [with smartphones] – for most of the time it’s sleeping," said Yota CEO Vlad Martynov. "It’s just a black box, the display is dark. It's useless and there's no value to me."

"Yet behind the screen, there's a tremendous amount of information," he added. "But to access it, I need to wake it up, search it, and spend some time before I finally get what I need."

The company said the phone can run for 68 hours if using the e-paper display alone. The second screen also continues to show some images - such as maps, for example - if the battery dies. Yota has also created gestures and swipes to pass information between the two screens.

Specs
Internally, the YotaPhone doesn't rival high-end devices such as the Samsung Galaxy S range or the iPhone 5s. The LCD panel comes with a screen resolution of 720 x 1,280, while the rear screen is greyscale, with a 360 x 640 resolution.

The handset features a dual-core 1.7GHz Snapdragon processor and 2GB of RAM paired with 32GB of storage. There's also a 1,800mAh battery and the phone runs Android 4.2.2 Jelly Bean.

It also features a 13-megapixel main camera, with a 1-megapixel front-facing snapper.

With a relatively expensive price and no US launch, analysts were sceptical as to whether YotaPhone could revolutionise smartphones.

"In people's minds Yota Devices is a no-name company; it's not Samsung or Nokia or Apple, which all have their fans," TelecomDaily analyst Denis Kuskov told Reuters. "No one will be expecting a YotaPhone."

Grow your software revenue by selling these 5 affordable, essential tools for the modern workplace
By Shona Ghosh
Dec 5 2013
8:57AM