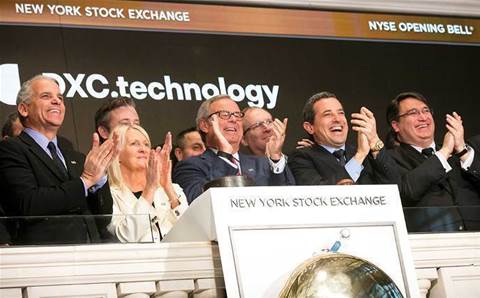 DXC Technology chief executive Mike Lawrie said clients have experienced no delivery disruption from the CSC-HPE Enterprise Services merger and have enjoyed an infusion of innovation and new ideas.

Clients are turning to DXC for both rock-solid delivery as well as assistance around innovating and navigating through the digital transformation process, Lawrie said. Customers have overwhelmingly signalled that they are looking to DXC for innovation and new ideas, Lawrie said, and love the company's tight bonds with top-tier suppliers like Microsoft, AT&T and Amazon Web Services.

"The door is open, and we have got brand permission to do this," Lawrie said. "Now it's up to you to walk through that door and take advantage of that opportunity."

Vendor partners, meanwhile, are excited about gaining access to a larger and more robust install base, Lawrie said. DXC has some 6000 clients globally, about half of which sit in the health care, banking, energy, travel and transportation and insurance industries.

Agreements are in place with most of DXC's key suppliers, Lawrie said, which will enable the company to put a more centralised procurement place in place to make it easier for the company to manage supplier agreements in the way it desires.

DXC's combined billing system, financial system and Salesforce software have also worked perfectly since the first day of joint operations, Lawrie said. Plus the company is in the process of consolidating facilities in areas such as London, where CSC and HPE ES will be moving out of separate facilities into a single, combined facility.

"I am really pleased with the integration effort so far," Lawrie said. "Our partners couldn't believe that, within seven weeks, things were operating the way they are."

DXC is also thinning its organisational structure and beginning to make some of its proposed workforce cuts, Lawrie said. The company has a "labour war room" in place that tracks the "surplus" created when each layer of management is named and proceeding accordingly.

Company executives meet at 7.00am ET every Thursday to track every new employee hire and departure, Lawrie said, making sure to note the geography, skill sets and level of the pyramid for each affected worker.

The company plans to take a closer look at its use of contractor labour, Saleh said, as well as its spending on hardware and software. Labour cost cuts for DXC will begin this quarter and accelerate in coming quarters in accordance with local laws, Saleh said.

All told, DXC has said it expects to achieve US$1 billion of cost savings by March 2018, with 70 percent of that coming from workforce cuts and supply chain efficiency.

"We are managing this thing very, very tightly so we know exactly what's going on," Lawrie said. "And then, we make adjustments as we go forward."

In CSC's final quarter of standalone operations, which ended 31 March, the company reported that sales jumped to US$1.89 billion, up 4.5 percent from US$1.81 billion a year ago. That fell short of Seeking Alpha's projection of US$1.94 billion.

The earnings information pertains only to pre-merger CSC, and does not include the financial results of HPE Enterprise Services in any form. DXC will begin reporting results for the combined operations of CSC and HPE ES in the quarter ending 30 June.

DXC Technology shares remained unchanged at US$78.64 in after-hours trading on Thursday. Earnings were announced after the market closed.

CSC saw Global Business Services (GBS) sales soar to US$1.04 billion, up 10.8 percent from US$941 million the year prior thanks to contributions from recent acquisitions and momentum from the company's business process services offerings.

Global Infrastructure Services (GIS) revenue sunk to US$846 million, down 2.3 percent from US$866 million a year ago despite contributions from recent acquisitions and growth in next-generation offerings.