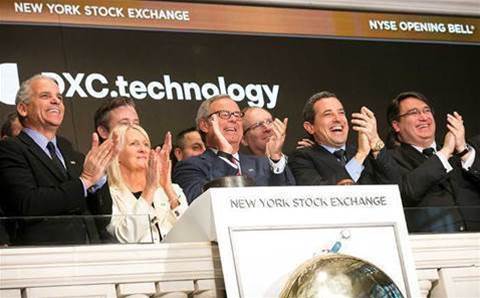 Solution provider giant DXC Technology continued to remake itself in its second fiscal quarter, cutting expenses by US$110 million on its way toward US$1 billion in savings this year.

The company reported that revenue for the quarter was US$6.16 billion and net income for the period was US$256 million.

DXC, created earlier this year by the combination of CSC and Hewlett Packard Enterprise's Enterprise Service business, has been working to reduce its expenses since the merger.

On a conference call, DXC executives said cost-cutting efforts were proceeding according to plan, including workforce reductions, reducing real estate and facility expenses, and implementing "supply chain efficiencies and consolidations."

"We continue to achieve key merger integration milestones," chief executive Mike Lawrie said. "We're executing our synergy plan, and we're on track to meet our targets of US$1 billion of year-one cost savings, as well as a billion and a half [dollars] of run-rate cost savings exiting the year."

Lawrie said the company cut its costs by US$110 million in the quarter, including reducing its workforce by about 4 percent.

"We're also on track in the early stages of separating our U.S. public sector business and combining that company with Vencore Holdings Company and KeyPoint government solutions," Lawrie said on the call Tuesday.

Lawrie provided few additional details on the call about the progress of the planned spinoff. The separation of the federal government business and follow-on merger are expected to be completed by March 31, 2018.

Lawrie said those services are generating about $4 billion in annual revenue. "We're seeing good growth in our digital offerings," the CEO said.

Also during the call, Lawrie and CFO Paul Saleh said it is too soon to tell what impact proposed tax reform legislation and tax cuts would have on DXC's finances. Lawrie said the proposed cut in the corporate tax rate from 35 percent to 20 percent "would certainly be a benefit," but too much of the legislation remained in flux to comment further.

The quarterly results include revenue from DXC's July 5 acquisition of Tribridge, a solution provider that focuses on Microsoft Dynamics 365 applications. During the quarter DXC also announced plans to buy Netherlands-based Logicalis SMC to boost its ServiceNow practice, but that acquisition is still in progress.

DXC said its $6.16 billion revenue in the second quarter was down 3.0 percent on a pro forma basis from $6.36 billion one year earlier. DXC offered the pro forma year-to-year comparisons because the company was created this year.