Embattled Toshiba board chairman vows to be 'agent of positive change' 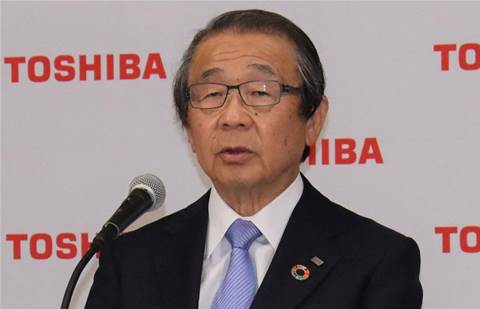 Toshiba Board Chairman Osamu Nagayama pledged to be "an agent of positive change, not a protector of the status quo," as he sought support from shareholders ahead of a crucial vote on director nominees next week that is seen as difficult to call.

Nagayama has come under intense pressure to resign after an explosive independent investigation this month found that Toshiba colluded with the Japanese government to block foreign shareholders from having influence on the board.

"As the chairperson, my priority is to provide Toshiba with the governance and leadership that you deserve," he said in an open letter to shareholders on Friday.

Shareholder advisory groups Institutional Shareholder Services Inc and Glass Lewis have both recommended against his reappointment as has Toshiba's No. 2 shareholder, Singapore-based 3D Investment Partners.

While Nagayama joined Toshiba in mid-2020 after the alleged pressuring of foreign shareholders took place, they argue that he should take responsibility for the board initially having resisted a shareholder's call for an independent probe.

At an extraordinary general meeting in March, Toshiba shareholders successfully voted for the probe into the allegations that the company sought to unduly influence some investors ahead of last year's annual general meeting. Gaining 58% of the votes, it was a landmark win for corporate governance in Japan.

But it is by no means clear that Toshiba's large activist shareholder base will win the day again next week.

Toshiba's shareholder base has changed somewhat since the conglomerate was reinstated in the Tokyo Stock Exchange's TOPIX index in late February, bringing in index-linked funds. While many of those passive funds were not eligible to vote at the time of the March EGM, they now are.

That has made it difficult to assess whether activist or traditional shareholders will have the upper hand at the June 25 AGM.

In the letter, Nagayama reiterated plans to begin a thorough search for additional independent directors and accelerate the selection process for a new CEO.

Current CEO Satoshi Tsunakawa retook the helm in April after the company's previous leader left amid controversy over a $20 billion buyout bid from private equity firm CVC Capital Partners but has said he does not plan to stay on for too long.

Nagayama in Friday's letter also repeated promises to launch a strategic review committee immediately after the AGM and begin a new inquiry into the allegations.

He also said the board has hired Makinson Cowell, an independent global investor study firm owned by Lazard, to expand the scope of its survey of shareholder opinions while the company makes important strategic decisions.

Prior to joining Toshiba, Nagayama had a well-respected career as CEO of Chugai Pharmaceutical from 1992 to 2018. Chugai became part of the Roche Holding AG group in 2002.

He was also a member of the board at Sony Group Corp for nine years until 2019, coinciding with the electronic giant's emergence from a turbulent earnings period to a sharp recovery.

A Sony spokesperson said in an emailed statement to Reuters: "Nagayama, especially when he served as board chairman for six years since 2013, contributed to building up a governance system that improved corporate value through healthy checks and balances."