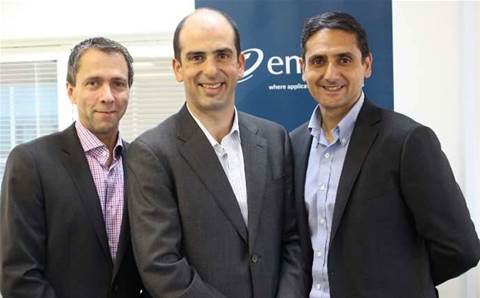 Enosys is also in the process to become Palo Alto Networks TRAPS authorised service centre, a specialisation open only for high-level partners.

The reseller expects to achieve a double-digit growth in revenue for the 2016 financial year. Sales director Joseph Mesiti said the company is focused on new business signings and the company should exceed 100 percent in signings growth.

"This gives you an idea of how well we are doing comparing to big names like Telstra and Dimension Data," said Mesiti.

The North Sydney-headquartered company has consolidated its presence in Brisbane and has signed contracts with four universities in the region.

Enosys has also opened its first Melbourne office to support the Palo Alto Networks business this year. "While [Palo Alto Networks] have strong partners down there we believe there is an opportunity for Enosys to replicate what we've done in Sydney and Brisbane," said Mesiti.

The company was also promoted to gold-level partner with F5 Networks.

Enosys see great business opportunities in the cloud market and is investing in it. "Businesses want the same level of visibility and control on the cloud as they have on premises," said Mesiti.

To provide this level of service the company has recently hired Darryl D'Costa, a Microsoft veteran, as practice lead with focus on cloud practice, especially Azure.

Enosys is a CRN Fast50 company that ranked number eight in 2014 and number seven in 2015, when it registered 105.69 percent growth in revenue.