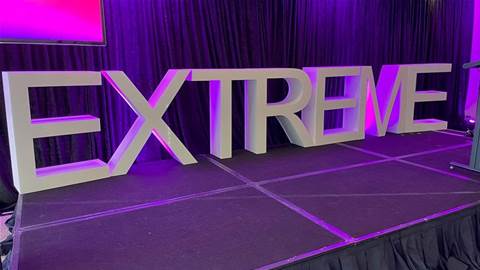 Channel-led Extreme Networks has revealed a series of new partner program updates that are leading with cloud-based networking and security solutions.

The company took to its Ignite Partner conference in Boston on Tuesday to share the new elements of the partner program, which includes badges and certifications, expanded training options, grant writing support and customer success programs. Extreme’s partners are watching the company win with its cloud-first solution that inspires networking simplicity, and as a result, Extreme is taking share from its competitors, like Cisco Systems, according to the company’s CEO, Ed Meyercord.

“We’re the right size company to work with. People feel like when they work with Extreme they can make a difference and they can influence our decision making. I’m not sure that’s true with our competitors,” he told CRN US ahead of the conference.

Extreme this week introduced three new partner certification badges to designate solution providers versed in these areas or verticals. The new State and Local Government Partners Badge will highlight preferred partners for state and local government customer solution delivery in their region. It will also give these partners access to specialised collateral including webinars, as well as market development funds in specific cases. The Sports and Entertainment Delivery Partner Badge will approve partners for stadium solution installations for sports and entertainment customer solution delivery in their region. This badge also qualifies partners to participate in sponsorship opportunities as they are available. Finally, the Diversity, Equity and Inclusion Badge will give partners the chance to work with Extreme on community-based initiatives and help these solution providers stand out in the marketplace.

Lastly, the company is introducing grant writing services to help eligible customers tap into and secure potentially millions of dollars of grant funds that are available each year for networking projects. The team will help customers and partners identify funding opportunities for global projects and create proposal and grant narratives and provide management and assistance throughout the grant award process, including successful project implementation plans once grants are awarded.

“One of the things that we had was the number of customers that we had transacting with Extreme — doing over a million dollars in business — grew 30 percent over the course of this past year, and that is a direct result of the work we’re doing with the channel,” Meyercord said.

Extreme during its final fiscal quarter of 2022, which ended June 30, landed a couple of very big customer deals, including LG Electronics and SK Telecom. Those wins, according to Meyercord, were the result of Extreme embracing the channel with these large customers for the first time, rather than working directly with customers of this size.

“We’ve seen a huge number of new logo wins that are outside the traditional business. Why? Because of the channel. It’s kind of another proof point. The evidence is really overwhelming that it’s really time for us to go take share,” he said of the company’s record growth and high-profile customer wins in the last quarter of the year.

The vendor also made important investments in channel headcount in 2022, including Scott Peterson, who joined in January as the company’s channel chief. Peterson formerly served as UC provider Mitel’s chief revenue officer after spending more than ten years at Verizon, most recently as vice president and general manager overseeing the carrier’s small business customer segment. Jennifer Orr, Extreme’s new vice president of Americas Channels, joined the company in June. No stranger to the channel, she previously served as vice president of master agents for Mitel.