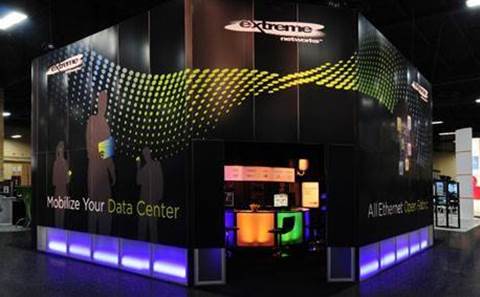 The move, combined with several other recent acquisitions by Extreme Networks, will help make the company a more formidable competitor to networking giant Cisco Systems.

"Cisco dominates the market. When we win a deal, it's taking a refresh deal from Cisco, or winning a new deployment against Cisco," said Norman Rice, Extreme Networks' executive vice president of global marketing, supply chain, and corporate development. "With Brocade, we get yet another area where we compete against Cisco."

The deal, under which Extreme Networks would gain Brocade's data centre switching, routing, and analytics business once Broadcom finishes its acquisition of Brocade, is valued at US$55 million, which includes US$35 million in cash on close of the deal and US$20 million in deferred payments over a five-year period.

For Extreme, it is the second big acquisition to be unveiled this month. The company in early March said it plans to pay US$100 million to acquire Avaya's networking business just months after Avaya said it was seeking Chapter 11 bankruptcy protection.

In October, Extreme completed the acquisition of Zebra Technology's wireless LAN business for US$55 million, creating one of the top three WLAN enterprise campus providers in the world.

The steady stream of acquisitions in the networking industry come as legacy vendors consolidate in the face of new technologies such as software-defined networking, said one solution provider close to Brocade and Cisco, who preferred to remain anonymous.

"Any of the new networking companies coming to market are positioning their business to be API-driven," the solution provider told CRN USA. "They are adapting networking technologies to merchant silicon."

Extreme Network's acquisition of Brocade's networking business raises the question of what happens to Brocade's move over the last few years to meld Fibre Channel and IP networking technologies, the solution provider said.

"Brocade has been busy converging Ethernet with Fibre Channel, and has introduced gear featuring Fibre Channel over Ethernet to support SANs," the solution provider said. "There have been a lot of moves in the last few years to support all traffic with a single network."

Extreme Networks has traditionally focused on core networking technology, Rice said. The acquisition of Zebra, which includes part of the old Motorola business, gave Extreme a wireless LAN presence. Avaya is bringing deployment simplicity and a strong microsegmetation and fabric technology with embedded security. The Brocade portfolio will bring high-end data centre networking along with visibility and automation, he said.

All four companies' technology are expected to be unified under the Extreme Management, Extreme Analytics, and Extreme Control software applications, Rice said.

"Our approach is to have a common interface for the customer regardless of how the customer approaches networking," he said. "The integration process started in earnest today. Within the next 12 months, we expect to have a single platform that is backward and forward compatible with all our technologies."

More acquisitions could follow, Rice said. "We're going to be opportunistic to scale our market share. The platform today is complete. New acquisitions will expand on that. We're unique in that all three acquisitions currently have tech refreshes going on."

Extreme Networks has always seen Cisco as a primary competitor, and this will be even more the case as the latest acquisitions close, Rice said. The recent additions will also provide Extreme Networks' channel partners with new opportunities to take market share from Cisco as well.

"Our objective is to take share from Cisco, and to work with partners and customers looking for an alternative to Cisco," Rice said.

Extreme Networks does not really see Dell EMC in its market, Rice said, but the company does compete with HPE, Aerohive Networks, and ARRIS Group, which is in the process of acquiring Brocade's Ruckus Wireless and ICS switch business from Broadcom.

For Extreme, the timing of its recent acquisitions is an excellent opportunity to use its pure-play networking business to compete with all these vendors at a time when the industry is consolidating, Rice said.

However, a source close to Cisco told CRN USA under the condition of anonymity that consolidation benefits Cisco, too.

The source added: "It's natural that there will be uncertainty. We've seen enough in the marketplace where customers feel anxious about product lines. Any company making an acquisition tries, in good faith, to retain the acquired company's engineering and sales talent. Acquisitions are a large part of Cisco's culture, but not all bets pay off."