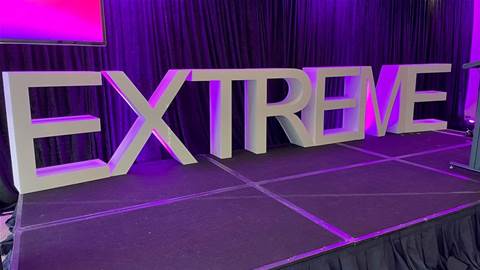 Extreme Networks believes that hybrid environments demand one network and one cloud that can move seamlessly to wherever the users are and can be managed from one place. As such, the networking giant is focused on universal hardware, subscriptions and services, and cloud-managed everything, according to Nabil Bukhari, Extreme’s CTO and chief product officer.

The company at Extreme Connect 2022 Tuesday unveiled a brand-new switch series and SD-WAN offering, as well as updates to its ExtremeCloud portfolio.

“Up until now, we have lived in a world where it was about technology-constrained outcomes. Now, we’re focused on achieving business outcomes and bringing together the technologies and platforms to do that,” Bukhari told CRN ahead of the event.

Extreme’s new 5720 Universal Switch is the latest in a series of high-performance wired and wireless switches for enterprise deployments. The 5720 Universal Switch can support multiple use cases, making it easy for customers to adopt new technologies while preserving hardware and associated licenses, Extreme said. The series can be managed alongside a range of wired and wireless services and SD-WAN platforms from the ExtremeCloud IQ cloud-based management platform.

The latest switch series is a continuation of Extreme’s universal platforms, Bukhari said. “People ask, ‘Is it a campus switch or a branch switch?’ and that’s the exact thing we’re trying to get away from,” he said.

Enterprises need technologies that aren’t location-dependent, he said. “The technology needs to deliver an outcome wherever you want that outcome,” he said. “The 5720 Universal Switch will help enterprises get the best of their Wi-Fi 6E regardless of where they deploy it.”

ExtremeCloud IQ CoPilot, a subscription within the cloud networks management platform that acts as a “digital adviser” for Extreme Wi-Fi networks that was first introduced in 2021, has been extended to now include digital twin capabilities that will let enterprises stage, validate and deploy switches and access points more easily. The addition of digital twin, which has been available in application development but not networking until now, will give enterprises an exact replica of their network for testing without impacting the production environment. When businesses are ready, their digital twin can move from the staging area in the cloud and into production, Bukhari said. “This takes out a huge amount of cost,” he added.

The update will mean reduced mean time to resolution using AI and machine learning to sniff out network anomalies and help IT and network administrators see, verify and trust proactive insight, the company said.

Extreme’s latest SD-WAN offering consists of Ipanema SD-WAN technology that the company acquired in 2021. The new ExtremeCloud SD-WAN offer includes a built-in firewall and advanced cloud security using EdgeSentry, powered by Checkpoint. The solution lets administrators and channel partners optimize more than 4,000 apps and dynamically route traffic to ensure high availability and low latency for demanding applications such as voice and video. The offering can be managed in the same way as the rest of the company’s networking offerings from a single platform—ExtremeCloud IQ.

ExtremeCloud SD-WAN is being offered via a subscription licensing model inclusive of hardware, software and support, the company said. “For customers, it’s as simple as buying a subscription and reducing complexity for them,” Bukhari said.

The company will continue to offer its previous flavour of SD-WAN, which was more “specialised,” as opposed to ExtremeCloud SD-WAN, a more generalised offer for many more use cases and verticals, Bukhari said.

Extreme does about 85 percent of its business today through the channel.