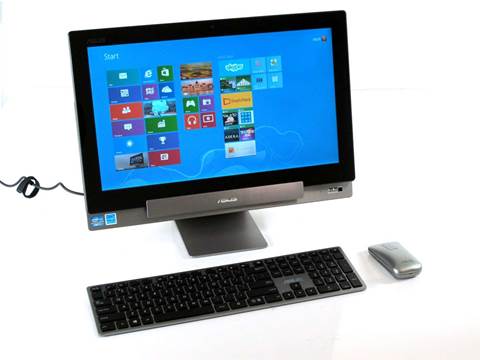 When we first glimpsed ASUS’ mash up of an All in One PC and 18.4in Android tablet at Computex last year it wasn’t in the best of circumstances. Its big unveil by CEO Jonney Shih involved the tablet failing to work.

However one of the things we like about the way ASUS goes about its business is that it has waited until all the bugs have been ironed out before officially launching the product. This has taken a good eight months or so to happen, and from our time spent with an engineering sample of the Transformer AiO, it is clear that the engineers have been busy.

When first firing it up, what strikes is just how different a product it is from everything else out there on the market. There are two major aspects to the Transformer AiO, the first is a stand that contains a fully functional Windows 8 PC, dubbed the PC Station by ASUS. The second is a detachable 18.4in touchscreen which works as a monitor for the PC while docked and as an Android tablet when removed.

But even that isn’t the whole story. While the tablet works as a normal monitor when docked, when detached it connects to the PC via WiFi and a software package called Splashtop HD. This allows the tablet to be used as a remote screen for the PC, giving it the ability to run either Android or Windows 8 as you move around your home.

We have seen Windows 8 tablets before, even 20in models like Sony’s Vaio Tap 20, but we haven’t seen anything quite like ASUS’ approach. In fact, the biggest problem that ASUS will have ahead is convincing the public that there is a need for such a system. We can’t speak for the usage model, but as a piece of hardware it has excellent construction and design, and only a few minor issues.

Before we get to these it is worth looking into the hardware that drives the Transformer AIO. The model we have been testing is a pre-production one, and the underlying hardware is different from what will end up shipping to Australian retailers in a few months. There won’t be any physical changes to the design however, and once the actual retail models arrive in Australia we’ll be doing a full review. 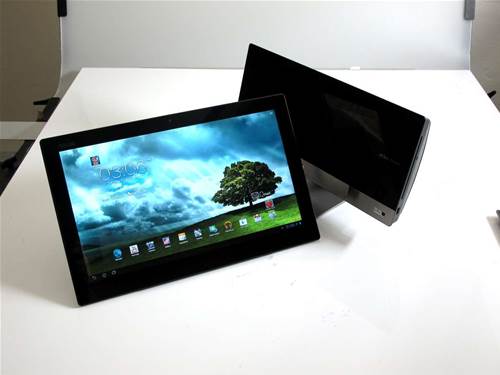 The Tablet and PC Station seperated

Despite the small size of the Transformer AiO, the PC Station features pretty robust hardware and a pleasing number of expansion ports. The sample we spent time with had a Core i7 CPU, but the retail version will ship with a desktop Core i5 processor. It also sports a mobile GeForce GTX 730M GPU with 2GB of RAM and a 1TB hard drive.

The PC Station not only has an optical drive, but it also has a HDMI output (handy if another member wants to use the tablet). In terms of expansion ports there also are four USB 3, one USB 2, Ethernet and a card reader. The PC Station is powered by an external power brick.

The Tablet features an 18.4in 1920 x 1080 IPS panel, which is gorgeous to look at and necessary to avoid issues with viewing angles. It is driven by a NVIDIA Tegra 3 processor, runs Android 4.1.2 and has 32GB of built-in storage. There is a Micro-SD slot, Mini-USB and 3.5mm audio output, and it can be charged through a separate power brick, or through docking with the PC Station.

Crucial to the functioning of the device is dual band 802.11b/g/n WiFi, which is featured on both components. In order to use the Tablet as a remote screen you have to connect both the Tablet and the PC Station to the same network, and then use a button on the tablet to switch between pure Android and Windows 8. Switching is fast and easy, and can be done while the Tablet is docked and in monitor mode. 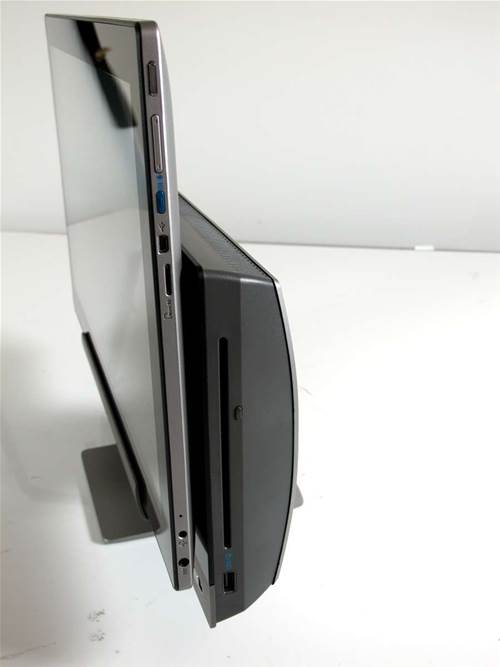 The blue button on the side of the Tablet is used to switch between Windows 8 and Android modes.

At 2.3kg the Tablet isn’t something you want to be lugging around and using, and to this end ASUS has added not only an integrated kickstand but also a small handle that makes moving it around easy. We did try using it purely as a handheld device, but it doesn’t take long for the size and weight to get a bit much - using it with the kickstand is quite clearly the preferred method.

In tablet mode the Transformer AiO works as a standard Android tablet, just bigger. Because it still uses a 1080p screen, the Tegra 3 delivers great performance in normal Android Apps. You’ll want to stay away from games like Real Racing 3, which want you to use the tablet as a steering wheel, but for your more traditional games like Angry Birds the experience is surprisingly good.

Where it does show its limitation is with battery life, which is noticeably shorter than a normal tablet. But at least ASUS goes some way towards mitigating that by allowing it to be charged with a separate power brick.

The only really disappointing thing about the Tablet is that there are noticeable compression artefacts when connecting to the PC Station via Splashtop HD. This is in some ways exacerbated by the clean lines of Windows 8’s ‘don’t call it metro’ UI, and ultimately whether it is acceptable will be a personal choice. There is also a slight degree of lag when using it over the network like this – it may be due to the pre-release nature of our sample, but we suspect it is an inherent limitation of the way in which the tablet connects remotely (these problems are non-existent when it is docked and being used purely as a monitor).

All up the Transformer AiO is one of the most unique products that we have seen in some time, and is a great example of how ASUS is brave enough to try new things (something that can’t be said of most PC or tablet manufacturers). While we are yet to see a convincing usage model for the Transformer AiO, there is no doubt that this is a well thought out and beautifully built fusion of desktop PC and tablet, and a concept that is going to be fascinating to watch in the future.

Cloud application revenue made easy
By John Gillooly
Mar 8 2013
11:06AM