Asus made a clear statement of intent at CES this year: it wants to own the 2-in-1 category of tablets, which it popularised with its original Transformer series almost four years ago. Now comes the Transformer Book Chi, a showcase for Intel's all-new Core M processors. 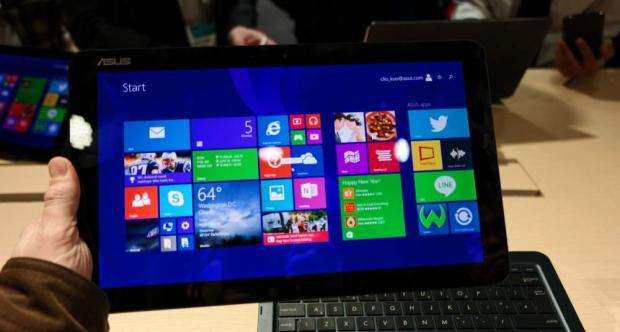 Asus chairman Jonney Shih made no secret of which product it wants the top-end Chi to be compared to either, with numerous mentions of the MacBook Air. The Chi, he emphasised, has almost double the number of pixels per inch, a greater colour gamut and superior performance.

That performance comes thanks to Intel's Core M processor: either the 800MHz Core M 5Y10, which Asus describes as having similar performance to a Core i3, or the 1.2GHz M 5Y71, which pushes it up to Core i5 levels. Naturally, I wasn't able to put such claims to the test; that will have to wait until we get a T300 Chi into the PC Pro labs. 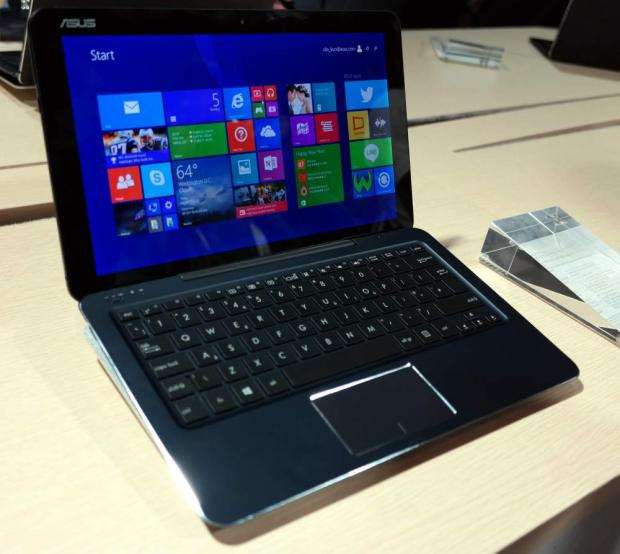 But it's not really the performance that's key, it's the astonishingly slim chassis design that it affords. I've never held a 12.5in tablet that feels as well balanced in the hand, and with a weight of 720g and 7.6mm thickness it's hard to criticise the design. It looks and feels great.

Once you add the dock the weight increases to 1.42kg, which is still impressive for a 12.5in laptop; that's arguably the biggest achievement Asus has made here.

The slimness does mean there isn't a massive battery inside, but Asus claims a respectable battery life of up to eight hours. It would have been nice to see a little more. Don't expect any extra via the keyboard, either, because this is a straightforward Bluetooth affair. 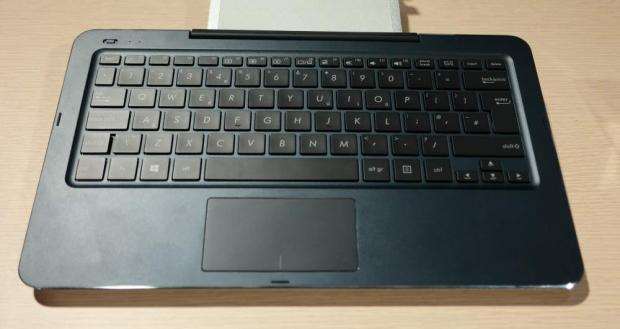 The other important thing to note about the keyboard: it's full size, which makes a massive difference when compared to its smaller siblings. Whereas I struggled to type on both the T90 and T100 Chi due to the tiny gaps between the keys, I had no such problems with the T300 Chi.

It's helped by a decent feel to the keys themselves. You don't get much travel, but it doesn't suffer from the squishy, cheap resistance we sometimes see on other detachable keyboards (and which both the T90 and T100 suffer from to an extent).

Asus takes a fuss-free approach to slotting the screen into the keyboard: no fiddly catches, no electronic connections you need to be aware of, it just slides into position. Despite this, it feels secure: I held it upside down from the top of the screen, and it stayed quite happily in place.

When the lid is closed it again feels well protected. I wouldn't have any worries about slipping this into my rucksack (Asus had, it turns out, a different view).

It's well made in general too. For example, there's very little flex on the lid and no showthrough on the screen when you press down with your fingers on the back. 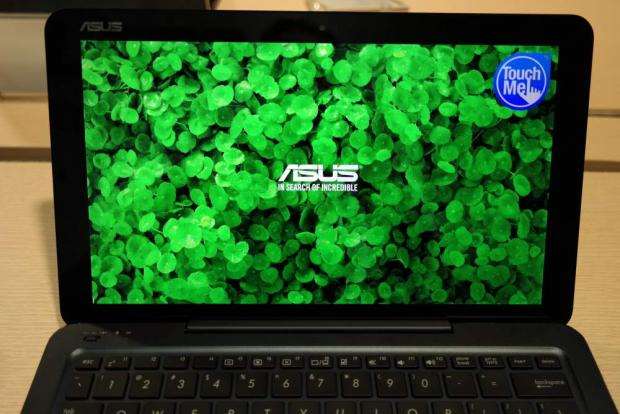 Which brings me to one of the T300 Chi's biggest highights: its screen. To put it simply, this is eye-poppingly bright. The samples on show all used the WQHD screen with a 2560x1440 resolution, but note that cheaper versions of the T300 Chi will include a Full HD 1920x1080 screen.

Both panels use IPS technology, though, so you can expect strong colours (Asus claims 40 percent greater gamut than the MacBook Air, and as the Air's display covers a mediocre 60 percent of the sRGB gamut we can make a wild guess that Asus is claiming 100 percent sRGB coverage for the T300) and viewing angles are as wide as we'd expect. This latter trait is a good thing, too, because one of the drawbacks of the Chi's straightforward docking procedure is a limited hinge that gives a maximum 125 degrees – it's just enough, but I'd have liked a little more flexibility.

Other specs to note: it includes a 128GB SSD, while the supplied RAM will either be 4GB or 8GB. It's also a little disappointing to note that the wifi is 802.11n rather than 802.11ac; I asked the product manager why, and he said they were still testing 802.11ac with this particular chassis design. He hopes later iterations, perhaps this year, will incorporate the faster, more reliable standard.

So I have niggly criticisms, but this doesn't compromise my positive feelings for the Transformer Book T300 Chi. It's a clever design, packs all the power most people need, and doesn't make any major compromises as either a laptop or a tablet (unless you consider its dependence on Windows 8.1 a compromise).

What's more, the price appears to be right. I say “appears” because right now we only have US pricing, but we know it will start at US$699 and that a higher-spec version with the super-high resolution screen and a faster processor will cost US$849.