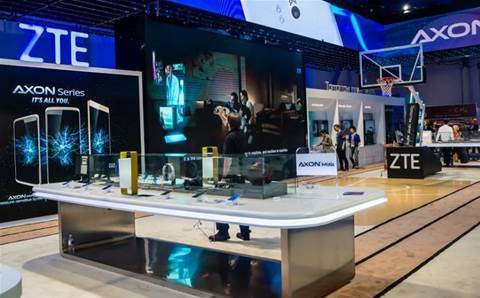 With Mobile World Congress still more than a month away, the gadget extravaganza of CES 2018 served as an opportune time for Android smartphone vendors to showcase their latest offerings.

While Huawei used its CES keynote to launch a new smartphone into the US market, ZTE showed off a trailblazing dual-screen phone and LG displayed its latest premium phone, the V30. Other vendors, including Samsung and a promising startup, both showcased new smartphones as well. The biggest smartphone news out of CES 2018 was Huawei's announcement that the Mate 10 Pro will be launching in the US through major retailers – though not through carriers, as had been widely rumored.

The US retail push will include the sale of the phone by retailers including Best Buy, Amazon and Microsoft. The Mate 10 Pro will feature a six-inch OLED display with a minimal bezel, a dual-camera system, and battery life of up to a full day of heavy usage, according to Huawei.

A top focus for ZTE at CES 2018 was showcasing the novel Axon M smartphone. The device is all about the screen – or rather, the two screens. The smartphone folds open to reveal dual 5.2-inch displays with 1080p resolution, which can be combined to provide 6.75 inches of display space (in "extended mode").

For productive multi-tasking, users can use the Axon M to run different apps on each display. Other uses include mirror mode, for viewing the same thing on both displays, which could come in handy with entertaining the kids by folding the phone open into a tent.

LG used CES 2018 to show off its well-received premium V30 smartphone. The V30 features a 6-inch OLED edge-to-edge display, with 2880 x 1440 resolution, and is powered by the eight-core Qualcomm Snapdragon 835 processor.

The smartphone aims to specialize in its photo- and video-taking capabilities, with a dual-camera setup (16-megapixel and 13-megapixel) that has an f/1.6 aperture lens on the main camera, as well as improved color-grading presets and point zoom. The V30 also features strong durability, with IP68 water resistance and Gorilla Glass 5 on its display.

If the crowds that visited the Gemini booth at CES 2018 are any indication, it may be a good time for the personal digital assistant to attempt a comeback. The Gemini folds open to reveal a physical keyboard, similar to the Psion PDA of the '80s and '90s.

The big difference this time: the Gemini PDA is a full-fledged Android smartphone.

Essentially, what you get with the Gemini is a small clamshell laptop – with a 6-inch FHD display and 10-core MediaTek Helio X27 CPU – that folds back up to make phone calls.

The Gemini will come in both wi-fi-only and 4G models; the unlocked phone will work with all major US carriers, according to its manufacturer, London-based Planet Computers.

The Gemini is poised to be a winner for those who miss their PDA of old, yet are still happy to be in the era of always-connected mobile devices.

While there wasn't even a teaser of the Galaxy S9 at CES 2018, Samsung did still set aside space to feature a few of its recently introduced new smartphones. One was the Galaxy A8+, which includes a 6-inch Super AMOLED display with FHD+ resolution.

Among the other features is a dual front-facing camera system (16-megapixel and 8-megapixel) with "live focus," which can blur a photo's background automatically.

In addition, the Galaxy A8+ includes fast-charging capabilities, facial recognition for unlocking, and a rear-facing 16-megapixel camera.

Grow your software revenue by selling these 5 affordable, essential tools for the modern workplace
By Kyle Alspach
Jan 16 2018
7:24AM