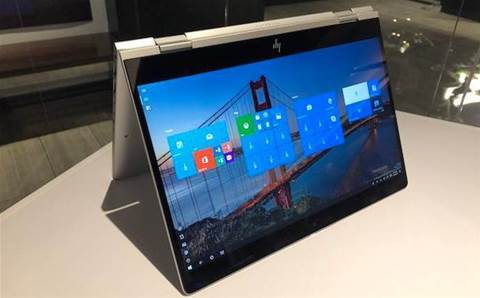 HP is going big at CES 2019 in Las Vegas with a number of major firsts in its personal systems business. Those include an array of new PCs for business users, such as HP's first EliteBook 800 series convertible (the EliteBook x360 830); first HP Chromebook x360 for businesses; and first all-in-one PC with HP's integrated privacy screen, Sure View.

After several years of offering EliteBook x360 convertible notebooks for its premium business segment, HP is expanding the x360 concept to EliteBook models used by mainstream corporate workers for the first time.

At CES 2019, HP is unveiling the EliteBook x360 830, the first-ever convertible model in the EliteBook 800 series. Along with the ability to use the 13.3-inch display in multiple modes, key features include an option for HP's Sure View integrated privacy screen; a built-in webcam cover (the HP Privacy Camera); and an optional high-brightness display (up to 1000 nits, compared to a maximum of 700 nits previously). That makes it the brightest EliteBook x360 so far, HP said. 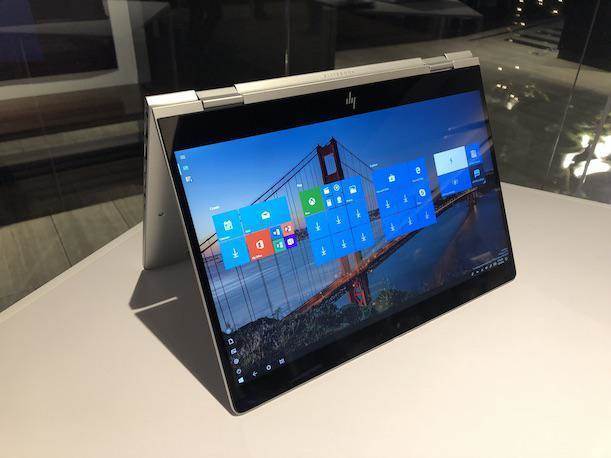 Looking at the specs, the notebook offers FHD (1920 x 1080) display resolution, eighth-gen Intel Core U series processors and up to 32 GB of RAM. The convertible is also highly portable at about 1.36 kg and 1.67 cm thick and features both USB-C and USB-A ports along with HDMI and nano-SIM. For biometric authentication, the EliteBook x360 830 offers an IR webcam for facial recognition and can be configured with a fingerprint sensor (sold separately).

The HP EliteBook x360 830 is available in March. Pricing has not been disclosed. HP is also debuting a refreshed EliteOne 800 all-in-one PC at CES 2019, and one big upgrade is that it will be HP's first AIO with the Sure View integrated privacy screen. The 23.8-inch display will be available with or without Sure View and will also be offered as an optional touch screen.

The AIO will feature slim bezels around the display and FHD (1920 x 1080) resolution, and a pop-up webcam for enhanced privacy. Available options for the EliteOne 800 G5 AIO include up to 64 GB of RAM, Intel Optane memory, SSD storage and AMD Radeon RX 560 graphics. Security capabilities include HP's Sure Start self-healing BIOS and Sure Click, which ensures that malware doesn't leave browser tabs to reach the PC.

The HP EliteOne 800 G5 AIO is available in July. Pricing has not been disclosed. The Sure View integrated privacy screen is also coming to a 23.8-inch monitor from HP for the first time, with the launch of the EliteDisplay E243p Sure View Monitor. The display features FHD resolution and a slim bezel on three sides of the screen. The EliteDisplay E243p Sure View Monitor is also highly adjustable with the ability tilt, pivot and swivel the display, while also adjusting its height by up to 5.9 inches of variability. Ports for connecting to a PC include VGA, HDMI, DisplayPort, while there's USB-A built in, as well.

The HP EliteDisplay E243p Sure View Monitor is available in February. Pricing has not been disclosed. HP is also using CES 2019 to launch its first Chromebook x360 model aimed at business users, with the Chromebook x360 14. The Chrome OS notebook offers premium design elements and stronger performance than the typical Chromebook, and ultimately is targeting enterprise customers that rely on G Suite apps. Security and manageability capabilities for businesses are provided for the notebook via Google's Chrome Enterprise offering.

The Chromebook x360 14 features a 14-inch FHD display with up to 220 bits of brightness, and includes an aluminum cover and keyboard deck as well as a diamond-cut trackpad. Notably, the laptop is HP's first Chromebook to offer an Intel Core i7 processor, with options up to the Core i7-8650U (up to 4.2 GHz). The HP Chromebook x360 14 also provides strong battery life of up 13 hours on a charge, a backlit keyboard and a thin form factor of 0.63 of an inch thick. For connectivity, the notebook offers two USB-C ports and one USB-A port.

The HP Chromebook x360 14 is available in January. Pricing has not been disclosed. In another "first" for HP that's launching at CES 2019, the company will debut what it's calling the "world's first AMD Chromebook"—featuring an AMD CPU and integrated AMD Radeon graphics. The notebook includes a 14-inch display with HD (1,366 x 768) resolution, dual speakers from Bang & Olufsen, up to 32 GB of storage and battery life of up to 9 hours and 15 minutes on a charge.