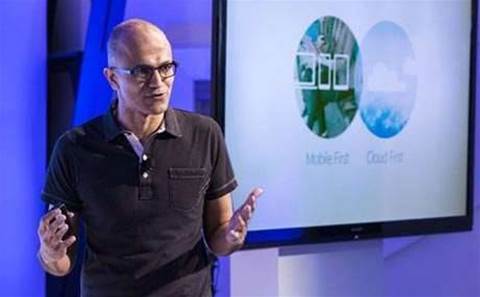 During his opening keynote Monday at Ignite, Microsoft's conference for IT professionals and developers, CEO Satya Nadella gave a glimpse into how Microsoft is seeking to revolutionise nearly every industry with technologies including cloud, artificial intelligence and mixed reality.

Nadella said Microsoft is also looking beyond current technology paradigms and into frontiers such as ultra-powerful quantum computers, which may be capable of immensely faster computations than today's computers.

Microsoft is continuing the emphasis on providing software for enabling a modern workplace, which began in July with a restructuring and refocusing of the company.

Nadella said during his Ignite keynote that the nature of work is "no longer about routine tasks - it's about unlocking the creativity inside of your organisation" and "going beyond individual productivity to dynamic teams".

The Microsoft 365 software bundle - which includes Office 365, Windows 10, device management and security capabilities - thus becomes a "strategic digital asset" not just for day-to-day work but also for capturing and connecting the knowledge held by employees.

One example of this in practice so far is the Microsoft Graph API, which now integrates Office 365 with the Microsoft-owned professional network site LinkedIn; the API can, for instance, help provide easier ways for employees to find co-workers with certain skills and expertise.

Nadella said that modern organisations "can't be captive to the old way of doing things" in terms of business applications. Applications need to be more modular and automated than in the past, he said.

The Dynamics 365 cloud CRM and ERP system, for instance, will now offer modular apps that offer limited slices of functionality inside the platform. One such modular app, Attract, will focus on helping users to recruit qualified job candidates.

Meanwhile, Nadella also discussed the promise of "AI-first" business applications, which hinge on artificial intelligence for their core functionality.

Microsoft is using its own AI technology to handle online customer service and support inquiries, and HP Inc. is also using Microsoft's technology for the same purpose, Nadella said during his keynote. "This is just the beginning of a complete new journey of building these AI-first business applications," he said.

Echoing his comments during the Inspire partner conference in July, Nadella said during his Ignite keynote that one emerging paradigm in computing can be summarised as that of "intelligent cloud and intelligent edge".

The technologies, such as Microsoft's Azure cloud platform and services, help provide massive productivity through "the agility of being able to do continuous integration and deployment" of new software.

Nadella discussed a number of technology solutions that Microsoft customers are rolling out that fall under the umbrella of the intelligent cloud/intelligent edge. They include a software solution developed by Trimble to build digital visualisations of mines, for such purposes as making predictions about what will transpire in a mining operation.

Land O' Lakes, meanwhile, is using Microsoft technologies to enable more-precise agricultural operations and improve its crop yields, Nadella said. "These intelligent cloud and intelligent edge applications are not things way into the future. This is happening today - this is happening across industries," he said.

One area that got more attention from Nadella during his Ignite keynote than at recent conferences was mixed reality. Following the announcement last week that Ford is expanding its tests of Microsoft's HoloLens mixed-reality headset, Nadella's keynote included a demo of how the HoloLens platform integrates with Microsoft Teams to enable collaboration with co-workers inside the headset view.

Nadella said that along with AI-first business applications, many customers are now building "mixed-reality-first" applications, with another real-world example being the Trimble mining software.

In the realm of technology frontiers, Nadella discussed the progress of Microsoft's efforts in quantum computing - which aims to provide far greater computing power than currently available by leveraging principles of quantum physics. While Microsoft is working to develop the hardware necessary for a quantum computer, the company is also working on the software side and is now looking to engage developers.

On Monday, Microsoft said that it's created a new programming language for use with quantum computing, and plans to make related debugging and simulator tools available to developers by the end of 2017. The aim, Nadella said, is for quantum computing to "tackle some of the biggest challenges that we still face as a world".

Cloud application revenue made easy
By Kyle Alspach
Sep 26 2017
6:40AM