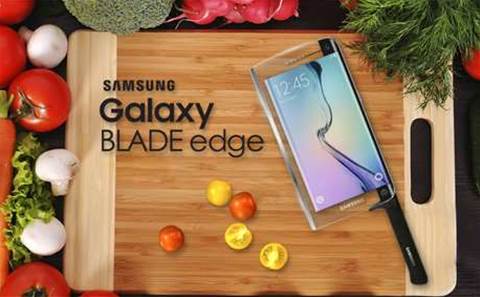 It’s not often you’ll see Kogan, champion of online retail, rallying behind the cause of bricks and mortar. No, the company isn’t opening a physical store, but it did announce today a new “Bricks and Mortar” bundle. As chief executive officer Ruslan Kogan explained: “People have been asking me for years if Kogan.com will become a bricks and mortar retailer. I knew that Aussies love getting the best prices on the latest products like LED TVs and iPhones, but I had no idea so many people were after building supplies.”

It’s hard to believe, but iTnews has unearthed one of the oddest pieces of tech memorabilia we’ve heard about in a long while. It’s a napkin featuring what iTnews claims to be a sketch of an early design of the NBN. Our colleagues report that the item was up for sale on eBay this morning for $5,000.

Bulletproof lets you touch the cloud

We’ve seen plenty of “ground breaking” technology announcements, but it’s not often they involve delivery vans. Australian AWS partner Bulletproof has announced it will use a fleet of vans at “strategic locations” across Australia to deliver cloud capacity to customer premises.

The company boasts it will elminiate the “invisibility” problem plaguing the cloud. “Customers love the service Bulletproof already provides, but the Cloud is intangible. We wanted to offer something that our customers can see and touch,” said Anthony Woodward, Bulletproof chief executive officer.

We've already seen curved phones, so we suppose it's not too much of a stretch to imagine a phone so sharp it can be used to chop food. Samsung's Galaxy Blade Edge is supposedly designed for just that, with a "diamond edge blade" for superior cutting.

The future of electronic messaging? Wave your hand in front of this temperature controlled mailbox to open it, and you’ll find envelopes categorised into smart folders, as well as spam filters and an Android touch display on the side. Add videoconferencing and you’ve got a replacement for your laptop.