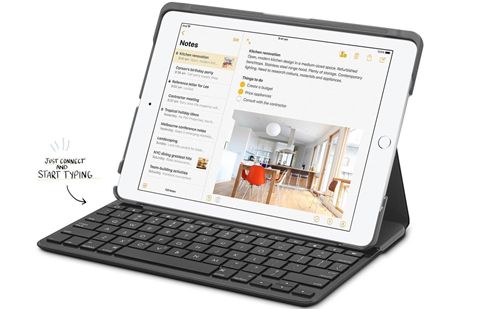 Apple's decision to lower the price of the entry-level, 9.7-inch iPad last year turned out to be a wise move: the company's release of a $469 iPad returned the tablet line to growth in 2017. Now, Apple is releasing a significant update to its 9.7-inch iPad for 2018.

The new iPad was announced on Tuesday during Apple's education-themed event at Lane Tech College Prep High School in Chicago. Not surprisingly, the iOS tablet includes a strong focus on meeting the needs of students and teachers.

What follows are five key things to know about Apple's new iPad for 2018.

Another major move on the new iPad is the addition of Apple's A10 Fusion processor. The inclusion of the chip will provide a 40-percent leap in CPU performance and a 50-percent boost in graphics speed over the previous entry-level iPad, which featured the A9 chip, according to Apple. The result should be "seamless multitasking" and capabilities for meeting the needs of graphics-intensive apps, the company said.

Apple said the 9.7-inch screen on the new iPad would feature Apple's popular Retina display technology. Meanwhile, thanks to an 8-megapixel camera and motion-tracking sensors such as an accelerometer and gyroscope, the new iPad is specially outfitted for use with augmented-reality apps. Other key features include 10 hours of battery life, fast wireless capabilities (up to 300 Mbps over LTE) and support for Touch ID fingerprint recognition for authentication.

Apart from the support for drawing and annotating with Apple Pencil,  which should have plenty of applications for classroom activities and homework, the new iPad is also being targeted for use with other new education software. Apple said the forthcoming Schoolwork app, which will be released in June, will enable teachers to create assignments and view the progress of their students. Features in the Schoolwork app will include an easier method for creating and distributing assignments, called Handouts.

Additionally, Apple said it would provide 200 GB of free storage in iCloud to any student or teacher that has a Managed Apple ID.

The new Apple iPad is available to order now in the Australia, and shipping will begin "later this week," according to Apple.