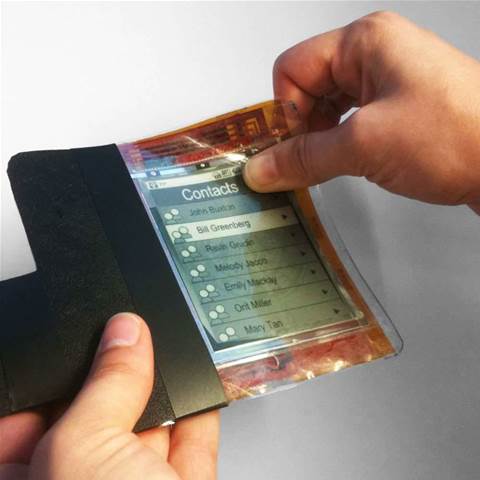 Flexible computers could be with us in 10 years.

Canadian researchers have shown off a new flexible mobile device built using e-paper technology that can perform all the functions of a normal hard-cased smartphone.

Dubbed the PaperPhone, the gadget can take calls, send messages, play music or display e-books when users bend or flex the unit, or write on it using the same e-ink technology found in devices like Amazon's Kindle e-book reader.

Still at the prohibitively expensive prototyping stage, the PaperPhone’s developers claim that mass production could be as close as five to 10 years away.

“This is definitely going to replace the iPhone, there’s no doubt about that,” said the phone’s creator Roel Vertegaal in an interview with US network ABC News.

The device itself is the result of collaboration between researchers at the Human Media Lab at Queen's University, Canada and Arizona State University's Motivational Environments Research group. About the thickness of a credit card, the prototype has a 3.7in diagonal screen and, in its current form, is around one-sixth the weight of an iPhone 4.

"This computer looks, feels and operates like a small sheet of interactive paper," said Vertegaal. "You interact with it by bending it into a cell phone, flipping the corner to turn pages, or writing on it with a pen."

The PaperPhone uses less electricity and is said to be more durable than a conventional smartphone. It can even be "hit with a hammer" according to Vertegaal.

Instead of button controls and touch-based features, the phone’s final version might work by users bending down both sides of the phone to open up an application ,or ‘dog-earing’ the top right corner to scroll forward.

Vertegaal’s group is not the only team working on flexible electronics for the mobile device sector. Mountain View, California-based Plastic Logic is a said to be working on a comparable offering.

"I don't think it's the future of [smartphones], but I think it will be a component of it," said Greg Harper, president of technology consulting firm HarperVision. "It will be there, but there is still work to be done."

The product is still very much at the prototype phase, costing somewhere around £5,000 for a single unit. Although the unit can use flexible batteries, at this stage, the processor, cables and other more rigid electronic elements are still connected as add ons.